The actress-turned-talk show host let her preference slip in a recent episode of The Drew Barrymore Show. Chatting with NBA legend Dennis Rodman, Barrymore and her cohost, Ross Mathews, brought up a recent news story about actor and intergenerational heartthrob Christopher Meloni, who told People he is a “big fan” of nudity.

“I always have been, always, since I was a child,” the Law & Order: Special Victims Unit star explained. “I think it’s a sense of freedom.”

“We’re a little uptight in this country over that whole thing,” Meloni continued. “How many nudist beaches do we have? Who doesn’t love a good nudist beach? I do. I went nude in Spain.” (He’s totally right about that, for the record. American culture isn’t as accepting of public nudity as many European cultures, even in contexts where naked bodies aren’t being sexualized.)

Rodman agreed, admitting to Barrymore and Mathews that he also goes nude on the reg and finds empowerment in “being an individual that’s very open.”

Mathews proceeded to make a joke about Meloni, who previously said that he regularly exercises in the nude: “Imagine a jumping jack, if you will. Whoever you are, things are… you know.”

“I have to say,” Barrymore interjected, “if I get a moment alone in my apartment and my kids have gone to their dad’s or there’s no one around, I’ll lock all the doors and I’ll walk around naked. It just feels like the most liberating act I can do.”

The 47-year-old actress is on to something. Despite our culture’s #complicated relationship to nudity, nakedness is about as natural as it gets. It totally makes sense that Barrymore would find being naked while home alone “liberating”: She’s creating intentional blocks of time to get familiar with her body in its purest state with no external influences — and without the mental pressure of stripping down as a means to hook up. Sounds peaceful to me!

Being nude in your everyday life is associated with some health benefits, too. Studies suggest that sleeping naked in particular can help you fall asleep faster, achieve better sleep, and even reduce anxiety. So, hey — the next time you have the house to yourself, consider following Barrymore and Rodman’s lead and giving naked time a try. 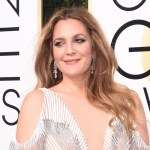 “All right, well guess what everyone: Tune in tomorrow — I’ll be nude, right here at this desk!” Mathews joked at the end of the segment. “You’ve convinced me, Rodman.”

Before you go, check out our favorite quotes to inspire positive attitudes about food and bodies: