DR MEGAN ROSSI: How to retrain a sensitive gut to eat veg again

How to retrain a sensitive gut so you can eat veg again: DR MEGAN ROSSI reveals people can overcome their fear of fibre foods

You know plants are good for you, but what if you’re one of the millions who suffer from a ‘sensitive’ stomach and they really just don’t agree with you?

It’s actually quite common, with as many as 30 per cent of adults experiencing a sensitive gut at some point — whether it’s bloating, constipation, full-blown irritable bowel syndrome (IBS), or perhaps just a short-term upset stomach after a bug or course of antibiotics.

The long-term solution for many gut-related symptoms is to eat more plants but often when I suggest this to clients, the standard response is ‘I want to but I just can’t — they upset my gut’.

A lot of people associate plant foods (specifically the fibre) with symptoms such as bloating, flatulence and heartburn. They say they have no problem with meat, fish and refined carbs, but if it has more fibre? Forget it.

You know plants are good for you, but what if you’re one of the millions who suffer from a ‘sensitive’ stomach and they really just don’t agree with you?

They then shun these foods — and if they do consume them, their body isn’t used to it and so can’t digest them easily. So their symptoms pop back up, affirming their belief that there’s no way they can eat this food.

If this sounds like you, the good news is, in my 15 years as a clinical dietitian, I’ve yet to meet someone whose gut I can’t retrain.

Fear of fibre can look different to different people. It might be one specific vegetable, fruit, or wholegrain, or a bigger group such as pulses (e.g., chickpeas and lentils) or cruciferous veggies (cauliflower, cabbage and Brussels sprouts).

If you have a condition such as IBS, you may have even been advised to limit a group of carbs packed with fibre called FODMAPs (fermentable oligosaccharides, disaccharides, monosaccharides and polyols), which are found in many plant foods.

But this really should only be for a few weeks to give your stressed gut some down time (and our research team at King’s College London has shown that cutting these foods longer term can reduce some beneficial anti-inflammatory bacteria, such as Bifidobacteria).

In fact, we all experience some gas and bloating from plant foods, it’s a natural effect of healthy digestion. When our gut bacteria digest fibre from plants, along with the myriad of beneficial chemicals, they produce some gas. But two factors can make these symptoms worse.

Alpha-gal allergy is an allergy to red meat — you are not born with it, but it’s most commonly triggered by a tick bite; this programs the immune system to react to alpha-gal (a sugar molecule) in red meat. 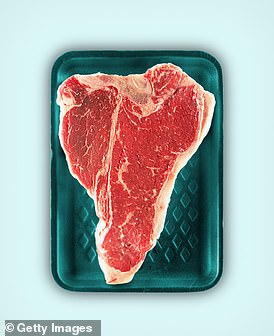 Alpha-gal allergy is an allergy to red meat

Foods that are low in fibre are mostly digested higher up your gut thanks to digestive enzymes our gut cells produce. But they can’t produce the unique enzymes required for digesting fibre. That’s where those trillions of microbes in our intestines come in — they can produce these.

But your microbes need to produce enough of the right kind for the type of fibre you’re feeding them. And while your gut microbes are really clever at adapting to what you eat — give them a bit of time and they’ll figure out what enzymes you need — they need an early warning.

That’s why if you suddenly go from a very low-fibre diet to a plant-rich one, you’re likely to feel it: bloating, gas and changes to bowel movements are to be expected. Your body will adjust with time, with symptoms lessening and disappearing as your microbes adapt.

It’s like avoiding exercise then suddenly hitting the gym and overdoing it: you’re going to be in pain for a few days. Far better to go regularly and increase your weights slowly and steadily. The same goes for your fibre intake.

The goal for any healthy diet is plant-based diversity. Even if you’ve been advised to eliminate certain foods, I don’t recommend cutting them out for life (the exception of course is a diagnosed allergy or coeliac disease).

I’d suggest introducing whatever triggers your ‘sensitive gut’ including IBS but very gradually, consistently and in small portions — tiny in some cases.

For example, beans and pulses are a common struggle.

Start with half a tablespoon daily for the first week; in the second, increase to one tablespoon.

You want to feel a little gut activity, it’s a sign of your microorganisms hard at work, but if there’s too much, reduce it to one tablespoon every second day.

Slow and steady wins the race for desensitising your gut. For most of my clients, the process takes around three months — in the long run this time is worth it, because just adding more plants into your daily diet can add an extra decade of life, according to a study published earlier this year by Bergen University in Norway.

The second part of the puzzle is a relaxed gut. If you’re stressed, it’s going to put a strangle-hold on your gut, thanks to the two-way connection between your gut and brain. Essentially, the millions of nerves connecting the two relay stress to your gut, which diverts energy (i.e., blood and nutrients) away from digesting your food.

In turn, your uptight gut becomes less efficient at absorbing gas and other chemicals produced during fibre digestion: usually the gas is absorbed across your gut wall into your bloodstream and finally breathed out via your lungs but, because of reduced blood supply, it can get trapped in your gut — cue bloating and cramps.

This helps explain why on some days you’re fine with a particular higher-fibre food but, on other, stressier days, it’s instant pain.

For a relaxed gut you need a relaxed mind — and there are ways to approach meal times to send calming signals to your digestive system.

Yoga can be a game-changer. A 2017 study by the University of Duisburg-Essen in Germany showed that two weekly sessions for 12 weeks of gut-directed yoga (including positions such as cat-cow, crocodile twist and happy baby) was as effective as the low-FODMAPs diet for reducing symptoms such as bloating and pain in people with IBS. (Search for these three moves on YouTube, or see my book, Eat Yourself Healthy.)

A final thought: when the microbes in your newly relaxed gut start to digest the increased plants (and fibre) you’ll be eating, they’ll produce more short-chain fatty acids, nurturing chemicals that strengthen the gut lining, increasing the resilience of stressed and sensitive guts.

So, yes, it can take time, but your efforts will pay off with this science-backed approach, trust me!

A hybrid between an omelette and a frittata, this has almost 7g of fibre — and it takes just minutes to prepare, for a deliciously healthy and easy way to start your day. And if you have irritable bowel syndrome (IBS), it’s FODMAP-lite (see main piece).

Combine the ingredients in a microwave-safe dish. Microwave on high for two minutes. Stir the mix and heat for a further minute.

If the eggs are still runny, continue to microwave in 20-second bursts until just set; it will keep cooking a little. Allow to cool for a minute before tucking in.

Has there been any research on the link between Parkinson’s and diet? Can symptoms of Parkinson’s be relieved by eating certain foods?

Although diet can’t cure Parkinson’s disease, it does appear to be protective, with research suggesting that a diet high in veg, fruit and fish is associated with a 22 per cent lower risk of it.

Gut problems tend to occur in the early stages of Parkinson’s, often years before motor symptoms. This has sparked speculation that the gut microbiome may be a trigger. A recent review of studies, published in the journal NPJ Parkinson’s Disease, confirmed that there are measurable differences in the microbiome in those with the condition, specifically, they had lower levels of the Faecalibacterium group of bacteria which are linked with anti-inflammatory benefits.

More research is needed to understand whether targeting the microbiome could help but, until then, a diet high in fibre from a diverse range of plant sources (veg, fruit, wholegrains, legumes, nuts and seeds, and herbs and spices) as well as extra virgin olive oil (high in gut-loving compounds) and oily fish (high in anti-inflammatory omega-3) is worth considering for symptom management.

Dr Megan Rossi cannot enter into personal correspondence. Replies should be taken in a general context; always consult your GP with any health worries.