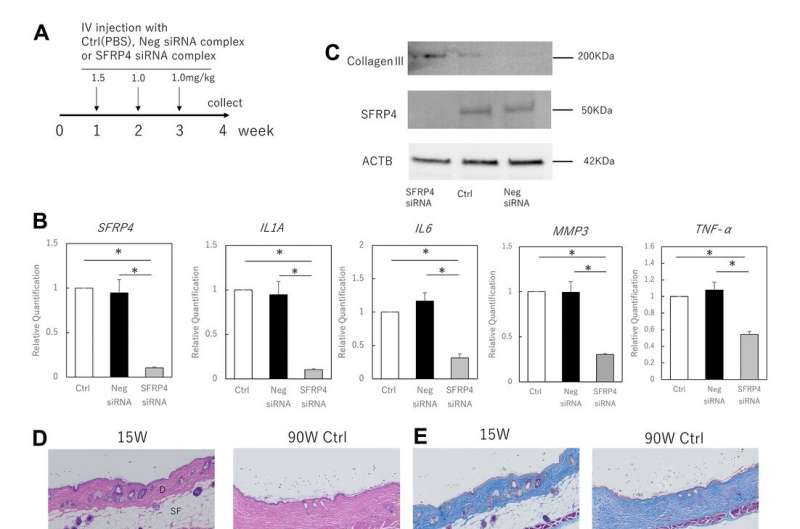 There is growing evidence that the appearance and texture of the skin that is altered during the aging process are considerably enhanced by the accumulation of senescent dermal fibroblasts. These senescent cells magnify aging via an inflammatory, histolytic, and senescence-associated secretory phenotype (SASP).

Secreted frizzled-related protein 4 (SFRP4) was previously determined to be expressed in dermal fibroblasts of aging skin, and its increased expression has been shown to promote cellular senescence. However, its role in the SASP remains unknown.

In a new study published in Aging, researchers Kento Takaya, Toru Asou and Kazuo Kishi from Keio University School of Medicine’s Department of Plastic and Reconstructive Surgery investigated the classical model of skin fibroblasts based on Hayflick’s mitotic limit, the observation of SFRP4 expression in replicating senescent cells, and the effect of regulating this on the suppression of SASP and aging skin.

“These results may contribute to the development of new therapies to ameliorate skin aging,” say the researchers.

The researchers found that SFRP4 was significantly expressed in p16ink4a-positive human skin fibroblasts and that treatment with recombinant SFRP4 promoted SASP and senescence, whereas siRNA knockdown of SFRP4 suppressed SASP. They also found that knockdown of SFRP4 in mouse skin ameliorates age-related reduction of subcutaneous adipose tissue, panniculus carnosus muscle layer, and thinning and dispersion of collagen fibers. These findings suggest a potential candidate for the development of new skin rejuvenation therapies that suppress SASP.

“This study shows that SFRP4, which is specifically expressed in aged p16ink4a-positive skin fibroblasts, contributes to SASP, and that treatment with SFRP4 causes worsening of this phenotype. To the best of our knowledge, the present study is the first to report that the suppression of SFRP4 expression in vivo ameliorates skin aging-related phenotypes, that is, adipose tissue atrophy and collagen fiber thinning, via SASP suppression,” say the researchers.