Phytocannabinoids in the form of Cannabis plant is widely consumed by humans. Two of the cannabinoid receptors, CB1 and CB2 are the key targets of this endocannabinoid system. While CB1 is widely present across the body, CB2 is mainly present in the immune system and CNS. Because of its location, the role of CB2 is being explored as a therapeutic target for modulating the immune system, treating inflammation, pain, and neurogenerative disorders. One of the ways this is being tested is by designing agonists and antagonists specifically against CB2 and assessing the effects. This has been difficult, partly because CB2 is very similar in sequence to CB1 and many of the designed compounds interact with both CB1 and CB2. 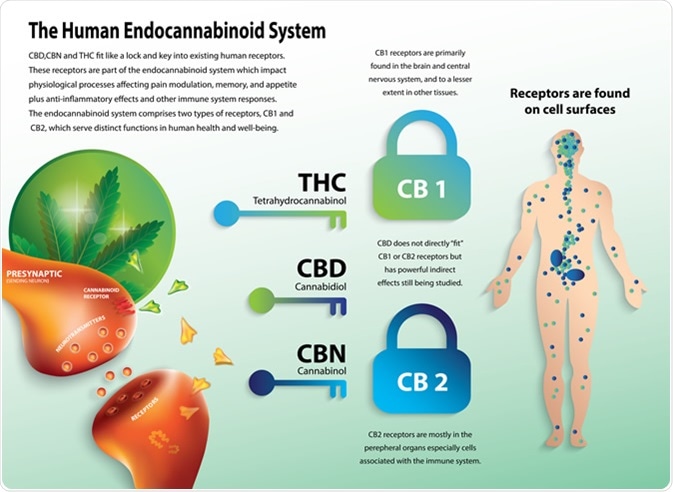 Thus, a recent study, which reports the crystal structure of CB2, can be very useful and help in designing compounds that help to selectively modulate CB2 without interacting with CB1. 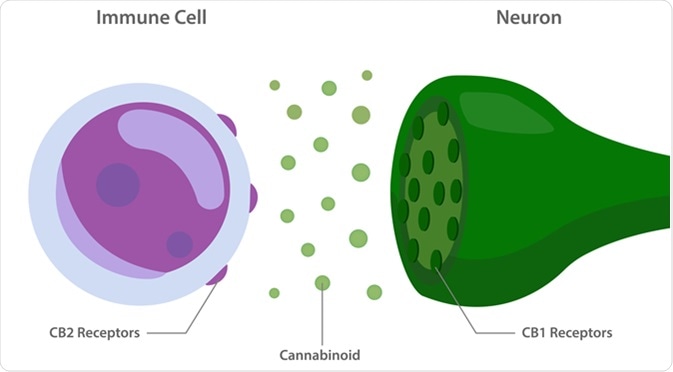 The Endocannabinoid system with cannabinoid receptors between immune cell and neuron. Image Credit: About time / Shutterstock

Making Crystals of the Antagonist

In the first step, the authors created crystals of CB2 antagonist AM10257 which was obtained by optimizing the first known antagonist of CB1, SR141716A. Few other modifications, such as the addition of an amide group along with the 1-adamantyl group at C-3 position and stabilization of the ligand-CB2 receptor increased the affinity of the antagonist for CB2 and also promoted CB2 crystals. To make the crystals, the authors replaced Ser222-Ala235 in the receptor with T4-lysozyme to make a fusion construct. Then five additional mutations were introduced and around 20 of the N-terminal residues were terminated to improve the stability of the protein and quality of the crystal.

The group then determined the structure of the CB2-AM 10257 crystals.  CB2 structure consists of 7TM bundle and intracellular amphipathic helix VIII. While the intracellular portion of CB1 and CB2 are similar and take up an inactive conformation, the extracellular portions of CB1 and CB2 are different. The N-terminal regions of CB2 that are not truncated from a short helix and are not involved in the binding to the antagonist. CB2 also shows a constrained conformation of the extracellular loop2 that is further stabilized by the disulfide bond within the loop.

Interaction of the Antagonist with CB2

CB2 has a strong electron density in the ligand-binding pocket that determines the placement of the antagonist. AM 10257 has a core pyrazole ring that is substituted with three groups that extend in various directions and it resides among the helices II, III, and VII. There are both hydrophobic and aromatic interactions between AM10257 and CB2.

The authors also compare this conformation to the structure of antagonist (AM6538)-bound CB1 receptor. While both AM10257 and AM6538 have the core pyrazole ring, their binding conformations are different. AM6538 assumes an extended conformation when bound to CB1 and AM10257 adopts a more constrained conformation. Also, AM10257, when the bond to CB2, shifts its position towards III and IV helices with the pyrazole ring as reference. The extracellular regions of the I and III helices move towards the ligand-binding domain. The conformation of Tryptophan is also one of the key difference between the structures of antagonist bound CB1 and CB2.  The three-arm scaffold of AM10257 restricts the side chain of Try258 leading to a distinct conformation. The confined conformation of Try258 further restricts the movement of helix Vi and leads to stabilization of receptor in the inactive state. In the CB1 bound to AM6538, the arm 3 pushes the helices I and II outside, as a result of which the arm 1 is positioned 5deg away from the Trp356.

The authors created two structurally related compounds, MRI2687, and MRI2594 to investigate the conformational changes in the ligand-binding domain of CB2. While these structures have the extended central 6-methylbenzothiazole ring in MRI2687 and 4,5-dimethylthiazole ring in MRI2594, they differ in the arm 1.  MRI2687 is inverse agonist and MRI2594 is an agonist for CB2. MRI2687 is similar to AM 10257 in terms of crystal structure, and the arm1 of MRI2687 interacts with Trp258 similar to CB2-AM10257 structure. However, as it does not have a large substituent in arm1, it does not sufficiently constrain the conformation of Trp258. Thus, this highlights the role of Trp258 and arm1 of the ligand for the CB2 activation and antagonism.

Dr. Surat graduated with a Ph.D. in Cell Biology and Mechanobiology from the Tata Institute of Fundamental Research (Mumbai, India) in 2016. Prior to her Ph.D., Surat studied for a Bachelor of Science (B.Sc.) degree in Zoology, during which she was the recipient of anIndian Academy of SciencesSummer Fellowship to study the proteins involved in AIDs. She produces feature articles on a wide range of topics, such as medical ethics, data manipulation, pseudoscience and superstition, education, and human evolution. She is passionate about science communication and writes articles covering all areas of the life sciences.