Could Chinese takeaways help in the fight against dementia? Controversial additive MSG improves the memory of patients, claim scientists

It’s a popular treat on a Friday night for many after a tough week at work because of its unhealthy qualities.

But a Chinese takeaway could actually have a medical benefit – and not just satisfy your taste buds, if new research is to be believed. 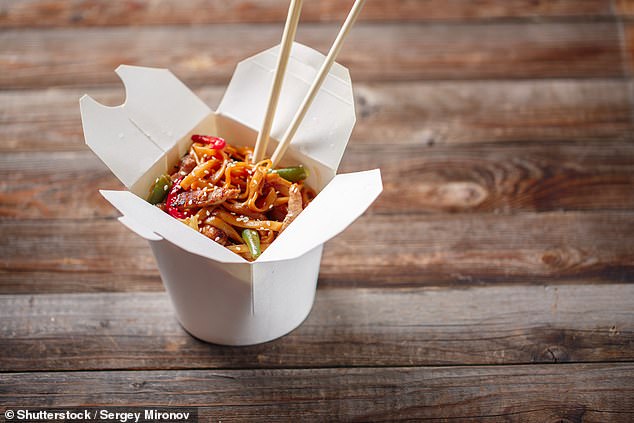 A Chinese takeaway could actually have a medical benefit – and not just satisfy your taste buds, if new research is to be believed

Participants were split into two groups, depending on whether they consumed MSG, known fully as monosodium glutamate.

However, widespread concerns over its safety has seen it fall out of favour over the past few decades.

In order to compare the two groups, the volunteers were then asked to complete tests on their memory.

The researchers at Tottori University found participants who consumed MSG daily had slight improvements in memory.

They were able to recall more words in the tests and found it much easier to tell the time, The Sun reports.

In a report of their findings, the scientists said: ‘It seems MSG may activate the hippocampus and improve memory.’

The researchers in Tottori – 150 miles (240km) north east of Hiroshima – were unable to explain why the additive helps memory.

However, it could be because it improves the absorption of zinc, which could, in turn, repair damaged brain cells.

Figures from charities show there are more than 850,000 people who are currently living with dementia in the UK today.

In the US, there are around 5.5million patients battling Alzheimer’s, which is the most common form of the memory-robbing disorder.

Charities have repeatedly pointed to a plethora of scientific evidence and claimed the opposite of the new findings – saying that a healthy diet can tackle dementia.

For decades, MSG has been blamed for people experiencing a headache or feeling sick after eating a meal from a Chinese takeaway.

Nicknamed Chinese restaurant syndrome, it has been dismissed as nothing but an ‘old wives’ tale’ by celebrity chef Heston Blumenthal.

Scientists have not produced convincing evidence of the negative health effects of eating MSG, and it is considered safe to eat.

However, despite its natural occurrence, when MSG is used as an added flavouring, it can have unpleasant effects on people who eat it.

WHAT IS DEMENTIA? THE KILLER DISEASE THAT ROBS SUFFERERS OF THEIR MEMORIES

Dementia is an umbrella term used to describe a range of progressive neurological disorders, that is, conditions affecting the brain.

There are many different types of dementia, of which Alzheimer’s disease is the most common.

Some people may have a combination of types of dementia.

Regardless of which type is diagnosed, each person will experience their dementia in their own unique way.

Dementia is a global concern but it is most often seen in wealthier countries, where people are likely to live into very old age.

HOW MANY PEOPLE ARE AFFECTED?

The Alzheimer’s Society reports there are more than 850,000 people living with dementia in the UK today, of which more than 500,000 have Alzheimer’s.

It is estimated that the number of people living with dementia in the UK by 2025 will rise to over 1 million.

In the US, it’s estimated there are 5.5 million Alzheimer’s sufferers. A similar percentage rise is expected in the coming years.

As a person’s age increases, so does the risk of them developing dementia.

Rates of diagnosis are improving but many people with dementia are thought to still be undiagnosed.

IS THERE A CURE?

Currently there is no cure for dementia.

But new drugs can slow down its progression and the earlier it is spotted the more effective treatments are.