The coronavirus disease 2019 (COVID-19) is primarily a respiratory disease; however, several previous studies have reported extensive myocardial injury in COVID-19 patients. In a recent Cells journal research paper, scientists present a comprehensive review on prognostic cardiac biomarkers in COVID-19 patients, along with a discussion on their importance in guiding decision-making for critical patients. 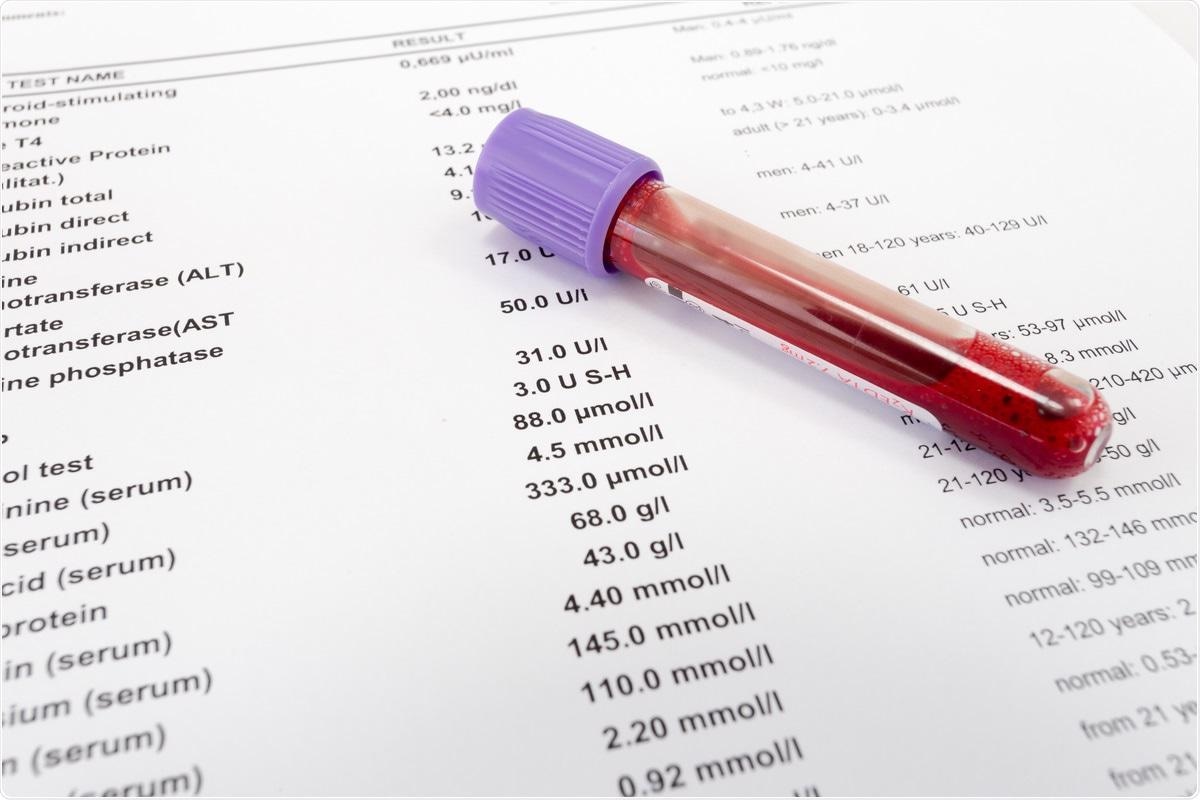 The cardiac tropism of SARS-CoV-2 has recently been demonstrated by the in situ labeling of SARS-CoV-2 ribonucleic acid (RNA) within the cardiac muscle cells, interstitial cells, and endothelial cells of autopsied hearts from COVID-19 cases. Despite these advances, the direct pathophysiological link between COVID-19 and cardiovascular disease has not been fully elucidated. Notably, cardiovascular complications following SARS-CoV-2 vaccinations, though modest in nature, have also been reported.

The goal of laboratory biomarker research is to detect patients who are at risk for deterioration early on in the disease. Several cardiac biomarkers associated with cardiovascular disorders have been associated with severe COVID-19 and the clinical consequences of this disease. In the current review, the researchers summarize these cardiac biomarkers that can be used by treating clinicians to predict the prognosis of COVID-19 and decide on the treatment protocol for COVID-19 patients. 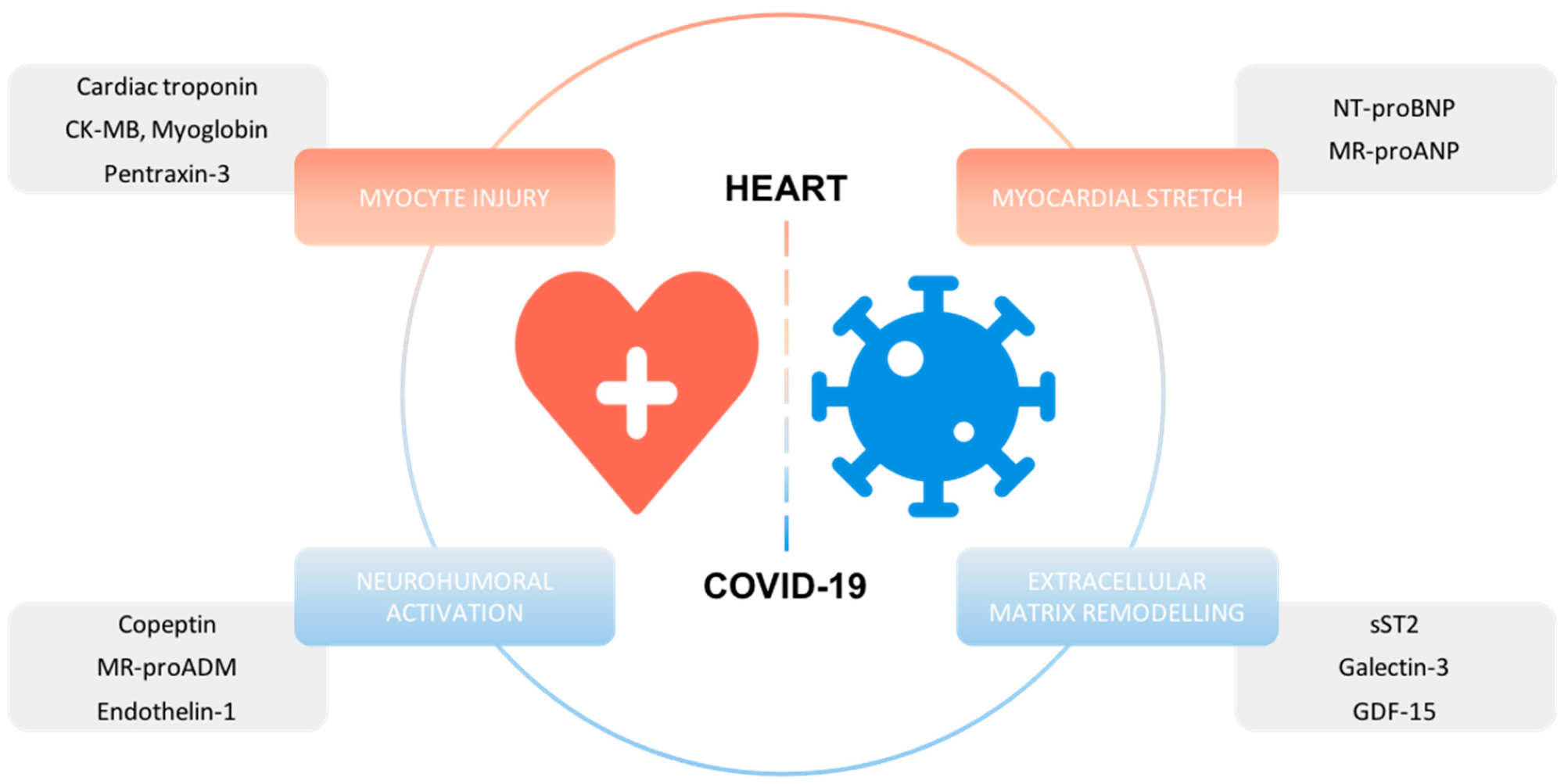 Overview of cardiac biomarkers with prognostic information in COVID-19.

Both high-sensitive cardiac troponin I (hs-cTnI) and troponin T (hs-cTnT) are key biomarkers for the diagnostic and prognostic assessment of acute coronary syndrome (ACS). Notably, hs-cTn levels have been linked to symptoms of ischemia like chest pain, as well as initial lab tests including electrocardiogram (ECG) and echocardiography.

Regular monitoring of hs-cTn levels, together with N-terminal pro-B-type natriuretic peptide (NT-proBNP), have improved clinical and prognostic information gained by biomarker analysis in COVID-19 patients. A recent meta-analysis of 28 studies consisting of 7,812 cases has found a significant association between COVID-19 disease severity and both hs-cTnI and hs-cTnT.

Another meta-analysis of 41 studies consisting of 9,532 cases reported a similar association for mortality prediction. Pooled data from meta-analyses have also shown consistent elevations in myoglobin and creatine kinase–myoglobin binding (CKMB), frequently with hs-cTn among patients with severe COVID-19.

Another potential biomarker, Pentraxin-3 (PTX3), is released as an acute phase protein in response to inflammation. The association of PTX3 with ischemic myocardial injury has been demonstrated in both animals and humans.

Similarly, in another study that investigated the therapeutic potential of siltuximab, researchers observed a significant reduction in both interleukin 8 (IL-8) and PTX3, which was associated with improved health outcomes.

Brain natriuretic peptides (BNP) are released secondary to ventricular overload. An enzymatic process cleaves proBNP into biologically active BNP and NT-proBNP, which are released into the circulation. Due to the longer half-life of NT-proBNP, this biomarker is used as the primary diagnostic and prognostic marker in heart failure.

Several studies on COVID-19 patients found significant associations between the concentrations of both BNP and NT-proBNP with regard to disease severity and mortality in these patients.

Mid-regional pro atrial natriuretic peptide (MR-proANP), which is a stable precursor hormone of ANP, is used as the indicator of ANP activity, which is unstable ex vivo. ANP is secreted due to pressure overload on the atria and serves as a diagnostic and prognostic biomarker of both acute and chronic heart failure.

In a previous study conducted by the researchers of this review, the team found MR-proANP as a significant predictor of 28-day mortality as compared to survivors, together with a significant correlation of disease severity. These researchers also observed that the prognostic value of MR-proANP was even higher than the NT-proBNP values; however, they insist on further research to confirm these findings.

ST2, which is a member of the interleukin 1 (IL-1) family, has two isoforms including its soluble form (sST2) and transmembrane receptor (ST2L). Both forms of ST2 compete with each other for binding to IL-33, with sST2 elevation typically used as a marker of risk in heart failure.

Of the 15 different known galectins, Galectin-3 is used as a risk biomarker in patients with acute cardiovascular disease. One Italian study found Galectin-3 to be a significant predictor of COVID-19-related mortality, alongside biomarkers including IL-6 and C-reactive protein (CRP). Galectin-3 was also associated with an increased risk of ICU admission and acute respiratory distress syndrome (ARDS).

Growth differentiation factor 15 (GDF-15), which is a member of the transforming growth factor ß superfamily, is an inflammatory biomarker. GDF-15 levels in hospitalized COVID-19 patients have also been associated with disease severity, increased ICU admission, and fatal outcomes.

Copeptin, a peptide neurohormone with roles in the regulation of fluid balance in the body, has been shown to be of prognostic value in several respiratory and inflammatory conditions. The team previously studied copeptin in 213 hospitalized COVID-19 patients and found significantly higher levels in patients with severe outcomes including deaths. Another study reported similar prognoses by copeptin across different respiratory infections, including COVID-19 and non-COVID-19 pneumonia.

Mid-regional pro-Adrenomedullin (MR-proADM) represents a stable form of ADM that can be used as a proxy marker of ADM activity. ADM has roles in diuresis, natriuresis, and vasodilatation, which make it a biomarker of particular interest in patients with heart failure, where excess levels of ADM have been described in several studies.

In regards to COVID-19, a Switzerland study reported a significant association between MR-proADM levels and the final fatal outcome. To this end, a 1.5-fold increase in median admission levels of MR-proADM was identified in non-survivors.

While several studies have reported the prognostic values of various cardiac biomarkers for predicting COVID-19 outcomes, non-specific elevations in levels of certain biomarkers like hs-cTn or NT-proBNP may lead to redundant diagnostic efforts, while simultaneously posing an exposure risk to healthcare workers.

In case of myocardial injury, the researchers of the current study advise healthcare providers to identify a correlation with symptoms and signs of cardiac ischemia such as chest pain, ECG, and echocardiogram results to appropriately guide their treatment decisions.

There is a significant lack of direct comparisons of cardiac biomarkers in patients with COVID-19, which is a necessity to ultimately define the “best” biomarker for risk prediction in this patient population.”

After earning a bachelor’s degree in Veterinary Sciences and Animal Health  (BVSc) in 2013, Namita went on to pursue a Master of Veterinary Microbiology from GADVASU, India. Her Master’s research on the molecular and histopathological diagnosis of avian oncogenic viruses in poultry brought her two national awards. In 2013, she was conferred a doctoral degree in Animal Biotechnology that concluded with her research findings on expression profiling of apoptosis-associated genes in canine mammary tumors. Right after her graduation, Namita worked as Assistant Professor of Animal Biotechnology and taught the courses of Animal Cell Culture, Animal Genetic Engineering, and Molecular Immunology.