A smart blood test can identify whether women with advanced breast cancer will respond to targeted drugs, scientists have found.

Researchers found the test can detect traces of DNA shed by tumours, allowing doctors to spot if a patient’s cancer has genetic mutations.

These mutations can be attacked with precision drugs. Experts say the discovery paves the way for greater use of personalised medicines.

Researchers at The Institute of Cancer Research in London trialled the test on 1,000 women with advanced forms of the disease.

They found it was as accurate as biopsies 95 per cent of the time. Biopsies can be painful and getting results back takes time.

It could spell the end of biopsies, which doctors rely on before offering experimental drugs to try and halt the spread of the disease.

Charities have said the new liquid biopsy, as it is known, is ‘exciting’ and a ‘huge step’ forwards for treating breast cancer.

Experts hope this will spell an end to the ‘trial and error’ approach to cancer treatment, in which a patient often has to go through surgery, then maybe radiotherapy, then several rounds of chemotherapy to make sure the cancer does not come back. 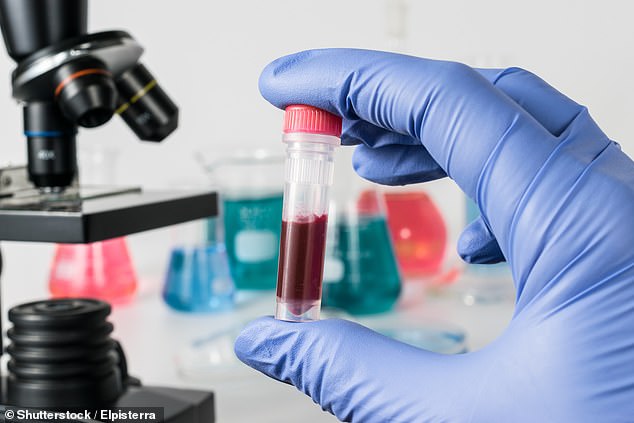 Lead scientists Professor Nicholas  Turner said: ‘This is a huge step in terms of making decisions in the clinic, particularly for those women with advanced breast cancer.’

He said such patients ‘could quickly be put on new targeted treatments matched to their cancer if it evolves to become drug resistant’.

Breast cancer is the most common cancer in the UK, with around 55,200 new cases every year. In the US, 268,600 women are diagnosed annually.

Women whose cancer has returned after treatment or spread have less successful  treatment options because their cancer may have become resistant to drugs.

Statistics show when the disease is diagnosed at the latest stage, only one in four people will be alive five years later.

The new study looked at whether a blood test could detect rare mutations in three genes called HER2, ESR1 and AKT1.

About one in five women with advanced breast cancer which has returned or spread will have one of these mutations, Cancer Research UK says.

Currently, these defects are identified by taking out a piece of the tumour using a biopsy or during surgery, a process that is invasive and slow.

These defects can also change after treatment or when cancer spreads, and in advanced cancer, it isn’t always possible to take further biopsies where cancer has spread.

The academic team, also from The Royal Marsden NHS Foundation Trust, wanted to see if the blood test could change this.

Of the 1,000 women involved in the trial, 142 had a mutation detected in their blood.

WHY IS A ‘LIQUID BIOPSY’ BETTER THAN A TISSUE BIOPSY?

The trial looked at whether a ‘liquid biopsy’ can accurately detect certain rare genetic mutations in woman whose breast cancer has returned or spread.

The usual way to find genetic mutations in breast cancer cells is to look at a tumour sample taken during surgery or a biopsy.

But mutations can change after treatment or when cancer spreads.  People with advanced cancer may also not be able to have further biopsies.

Therefore, the choice of targeted treatment is often based on the mutations found in the original breast cancer tissue samples, which is an outdated picture.

The liquid biopsy takes a sample of blood and then detects circulating tumour DNA.

Professor Carlos Caldas, senior group leader at the Cancer Research UK Cambridge Institute, said: ‘It’s relatively easy to take a blood sample, which means the test could be used to monitor how cancer responds throughout a course of treatment, or it may be able to detect the early signs of treatment resistance.’

Data from biopsy samples confirmed the blood test correctly identified the presence or absence of the mutations in more than 95 per cent of cases.

This suggests that the blood test could be suitable for identifying rare sub-types of breast cancer, replacing current invasive methods.

The patients were given experimental drugs targeted to their mutations. It is unclear whether the drugs worked.

Treatments offered to women with specific genetic mutations have not yet been approved for general use but are available in clinical trials.

The researchers believe the blood tests are now reliable enough to be used routinely by doctors, once they have passed regulatory approval.

Professor Turner said: ‘The choice of targeted treatment we give to patients is usually based on the mutations found in the original breast tumour.

‘But their cancer can have different mutations after it has moved to other parts of the body.

‘We have now confirmed that blood tests can quickly give us a bigger picture of the mutations are present within multiple tumours throughout the body, getting the results back to patients accurately and faster than we could before.’

‘It’s another step in the right direction and could mean a lot to people with advanced breast cancer.

‘Liquid biopsies are also showing promise beyond guiding treatment choices. It’s relatively easy to take a blood sample, which means the test could be used to monitor how cancer responds throughout a course of treatment, or it may be able to detect the early signs of treatment resistance.’

The research is not peer-reviewed or published yet. The results were presented at the 2019 San Antonio Breast Cancer Symposium, in Texas, today.