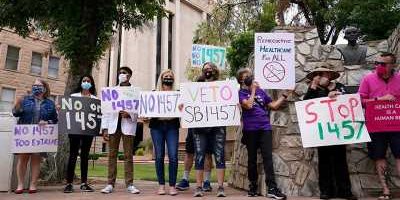 The measures signed by Gov. Doug Ducey will outlaw abortion after 15 weeks if the U.S. Supreme Court allows it, prohibit gender confirmation surgery for minors and ban transgender girls from playing on girls and women’s sports teams.

Bills targeting abortion and transgender rights have been popular with the conservative base in states where Republicans dominate but could be politically risky in a battleground state where Democrats have made significant inroads.

Ducey also signed the first of what is expected to be a host of election laws sent to him by majority Republican lawmakers in the name of election security.

He approved a bill requiring all voters to prove their citizenship, drawing fierce opposition from voting rights advocates who say it risks canceling the voter registrations for some 200,000 long-time voters. The bill also requires anyone newly registering to vote to provide proof of their address.

The Arizona abortion legislation mirrors a Mississippi law now being considered by the nation’s high court. The bill explicitly says it does not overrule a state law in place for more than 100 years that would ban abortion outright if the Supreme Court overrules Roe v. Wade, the 1973 case that enshrined the right to abortion in law.

“In Arizona, we know there is immeasurable value in every life – including preborn life,” Ducey said in a signing letter. “I believe it is each state’s responsibility to protect them.”

Ducey is an abortion opponent who has signed every piece of anti-abortion legislation that has reached his desk since he took office in 2015. He said late last year that he hoped the Supreme Court overturns the Roe decision.

Ducey’s signing letter was sent to Democratic Secretary of State Katie Hobbs, an abortion rights supporter who is seeking her party’s nomination in November’s election to replace Ducey, who is term-limited.

“Today marks a giant step backward in the fight for equality for women across Arizona and across the country,” Hobbs said in a statement. “With Governor Ducey’s signature, our elected leaders have chosen to side with the extremists in their party and turn their backs on the overwhelming majority of Arizonans who support the constitutional right to choose.”

“If that happens, it will open the floodgates to a barrage of dangerous legislation that gives politicians more power and control over our lives,” Caroline Mello Roberson, the group’s regional director, said in a statement.

Other states are considering similar bans or passing versions of a ban enacted in Texas last year that bans abortions after about six weeks of pregnancy that the Supreme Court has refused to block.

Meanwhile, Arizona joins a dozen other states with limits on sports participation for trans girls and becomes the third state to try and limit health care options for transgender teens. Oklahoma’s governor signed a sports ban on Wednesday.

Until two years ago, no state had passed a law regulating gender-designated youth sports. But the issue has become front and center in Republican-led statehouses since Idaho lawmakers passed the nation’s first sports participation law in 2020. That law is now blocked in court, along with another in West Virginia.

Republicans have said blocking transgender athletes from girls sports teams would protect the integrity of women’s sports, claiming that trans athletes would have an advantage. Ducey echoed that sentiment in his signing statement, saying the bill ensures girls and woman can compete “on a level playing field.”

Many point to the transgender collegiate swimmer Lia Thomas, who won an individual title at the NCAA Women’s Division I Swimming and Diving Championship last week.

But there are few trans athletes in Arizona schools. Since 2017, about 16 trans athletes have asked for waivers to play on teams that align with their gender identities out of about 170,000 high school athletes in the state and not all were granted, according to the Arizona Interscholastic Association.

Skyler Morrison, a 13-year-old transgender girl who lives in Phoenix, testified against the legislation and called for Ducey to veto it, tweeted that she was “truly disgusted and terrified for all of my trans family here.”

Critics said the legislation dehumanizes trans youth to address an issue that hasn’t been a problem. They said decisions about health care should be left to trans children, their parents and their health care providers.

The American Civil Liberties Union and the National Center for Lesbian Rights vowed to sue to block the law banning gender-affirming surgery for those under age 18.

“We’re talking about legislating bullying against children who are already struggling just to get by,” Democratic Rep. Kelli Butler said during the House debate on the sports bill last week.