All surgery, even small procedures, are dangerous for frail patients

There’s no such thing as a low-risk operation for frail patients: Even simple procedures such as fixing cataracts or repairing hernias are dangerous, study warns

All types of surgery – including fixing cataracts and removing cysts – are dangerous for frail patients, a study has found.

They looked at the outcomes of 400,000 veterans who had surgery – one in ten of whom were medically deemed frail beforehand.

Almost 12 per cent of frail patients had died 30 days after low-risk surgery – almost 60 times more than the 0.22 per cent of healthy patients.

Therefore, no procedure should be classed as being ‘low-risk’ when it comes to frail patients, doctors have said. 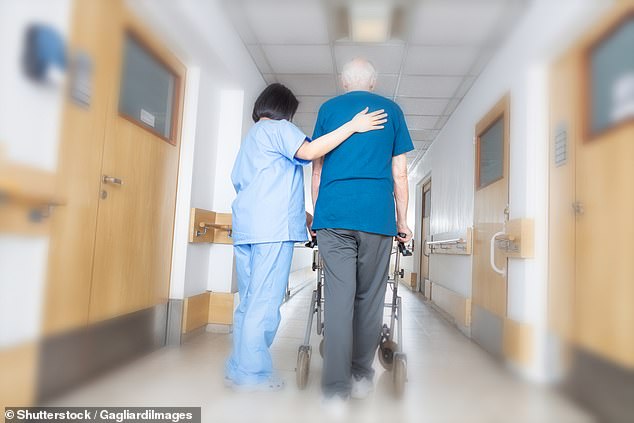 No procedure should be classed as ‘low-risk’ when it comes to frail patients, researchers warned after finding mortality rate is higher than previously thought (stock)

Figures show around 10 per cent of over-65s are frail, which often robs pensioners of their ability to wash and dress themselves.

Until now, research on frailty has focused on what happens after a high-risk surgery, which comes with a greater risk of death.

Study first author Dr Myrick Shinall, Jr, of the Vanderbilt University Medical Center, said they were ‘surprised’ by the findings.

He added that the team – funded by the Department of Veterans Affairs – think other surgeons will also be surprised by the results.

Of the veterans, 8.5 per cent were considered frail and 2.1 per cent were very frail. It is not clear what age the patients were.

Patients were grouped based on what type of surgery they had. Low-risk surgeries included hernia surgery, cataracts, and cyst removal.

Cataract surgery is the most common operation performed in the UK. There is no forced age restriction on how old patients must be.

Frailty describes how our bodies gradually lose their in-built reserves.

It causes lowered resilience, energy, slow activity and ability to cope with stress.

Around 10 per cent of people aged over 65 years have frailty, rising to between a quarter and a half of those aged over 85, according to The British Geriatrics Society.

It is more prevalent in women than men by almost double the rate.

Frailty leaves a person vulnerable to dramatic, sudden changes in health triggered by seemingly small events such as a minor infection or a change in medication or environment.

A move to a short term residential placement for respite or a trip to hospital can have unforeseen consequences.

This is because they are most at risk of poor outcomes from falls, disability, admission to hospital, or the need for long-term care.

The root cause of frailty is not completely known because not all people who become frail are of a certain age.

Surgeries such as amputation, arterial plaque removal, and knee, shoulder, or hip replacements were considered moderate-risk.

Mortality rates for frail and very frail patients were ‘alarmingly high’ across all levels of surgery, the findings showed.

Mortality were even higher for frail patients who had high-risk surgery, according to results published in JAMA Surgery. Death rates were higher 180 days after surgery.

Writing in the medical journal, the team said: ‘Even minor operations are high-risk for frail patients.

‘Surgeons and referring physicians should consider if the potential benefits of surgery warrant the increased risk.’

Surgeons often do not consider whether patients can endure the stress of surgery for low-risk procedures, according to the researchers.

Based on the results, the researchers have urged that patients be assessed frailty before any type of procedure.

If frailty is measured as high, surgeons could focus on interventions to reduce it before surgery – if surgery is really necessary, they said.