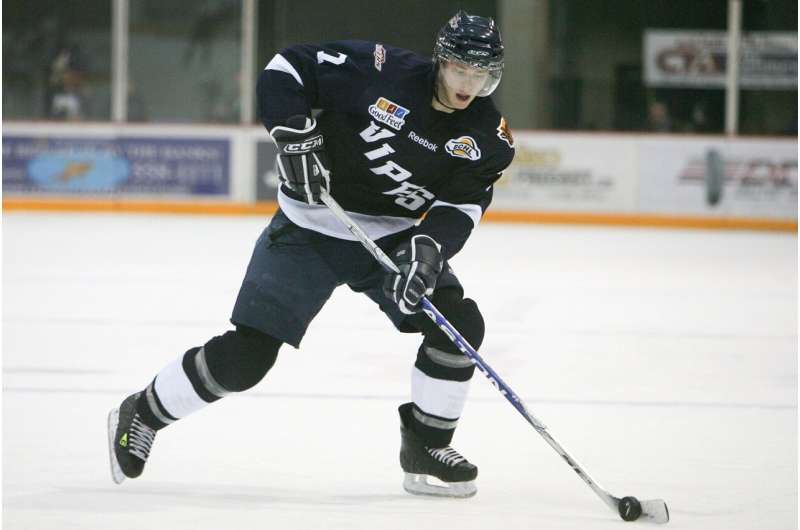 Chronic traumatic encephalopathy (CTE) is a degenerative brain disease linked to the repetitive head impacts that athletes get from playing contact sports. According to a new preliminary study, each additional year of playing ice hockey may increase a person’s chance of developing CTE by about 23%. The research being released today, March 2, 2022, will be presented at the American Academy of Neurology’s 74th Annual Meeting being held in person in Seattle, April 2 to 7, 2022 and virtually, April 24 to 26, 2022.

“Previous research has shown a relationship between increasing years of playing football and increased chances of developing chronic traumatic encephalopathy later on, and our results suggest the same is true for ice hockey,” said author Jesse Mez, MD, MS, of Boston University School of Medicine in Massachusetts and a member of the American Academy of Neurology.

The study involved 74 people who played ice hockey at various highest levels: seven played at the youth level, 25 played at the high school level, 22 played at the junior or college level, 19 played professionally and one played at an unknown level. In addition, 34 people, or 46%, played another contact sport like football. All donated their brains to research after their death. Of the 74 donors, 40, or 54%, were diagnosed with CTE at autopsy.

Researchers found that each additional year of play corresponded to a 23% increased chance of having CTE.

The disease is characterized by four progressive stages of severity. Stage one is characterized by abnormal accumulation of tau proteins in the frontal lobes of the brain. Stage four includes widespread tau accumulation, brain shrinkage and associated dementia. Each additional year of play was also associated with a 15% increased chance for a person progressing one CTE stage.

When researchers looked only at those who played hockey as their primary source of head impacts, the results were similar.

“While the absolute risk for ice hockey players of developing CTE is still unknown, it may be concerning to athletes and their families that we found each year of ice hockey play may increase the odds of developing CTE by 23%,” said Mez. “Our research may be useful for them when making informed decisions about play. Still, it is important to note that more research is needed to further confirm our results.”