Addicted to Vaped Nicotine, Teenagers Have No Clear Path to Quitting

Alarmed by the addictive nature of nicotine in e-cigarettes and its impact on the developing brain, public health experts are struggling to address a surging new problem: how to help teenagers quit vaping.

Until now, the storm over e-cigarettes has largely focused on how to keep the products away from minors. But the pervasiveness of nicotine addiction among teenagers who already use the devices is now sinking in — and there is no clear science or treatment to help them stop.

“Nobody is quite sure what to do with those wanting to quit, as this is all so new,” said Ira Sachnoff, president of Peer Resource Training and Consulting in San Francisco, which trains students to educate peers about smoking and vaping. “We are all searching for quit ideas and services for this new nicotine delivery method. It is desperately needed.”

A harsh irony underlies the search for solutions: Devices that manufacturers designed to help adults quit smoking have become devices that teenagers who never smoked are themselves fighting to quit.

The Food and Drug Administration and the attorney general of Massachusetts are investigating Juul Labs, the maker of the most popular e-cigarettes, to determine whether it deliberately lured teenagers with its sleek packaging and flavors.

On Monday Monitoring the Future, an annual survey of American teenagers’ drug use sponsored by the federal government’s National Institute on Drug Abuse and conducted by the University of Michigan, reported that teen use of e-cigarettes soared in 2018. 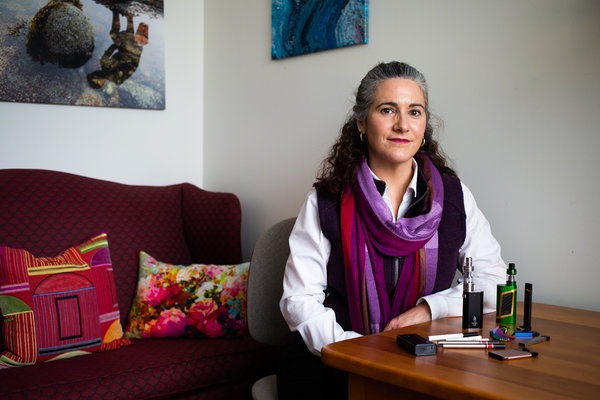 The survey, which polls eighth, 10th and 12th graders across the country, found the rise in nicotine vaping was the largest spike for any substance recorded by the study in 44 years. About 21 percent of high school seniors had vaped within the previous 30 days, researchers found, compared to about 11 percent a year ago.

The survey also found that many students believe they are vaping “just flavoring.” In fact, just about all brands include nicotine, and Juul has particularly high levels of it.

Over all, 3.6 million middle and high school students are now vaping regularly, according to a government study released last month.

The need for therapies dedicated to teenagers is pressing, said Marina Picciotto, a Yale neuroscientist who is president of the Society for Research on Nicotine and Tobacco. Adolescents are uniquely vulnerable to addiction.

The brain’s prefrontal cortex, which affects judgment and impulse, is still maturing. “When you flood it with nicotine, you are interrupting development,” Dr. Picciotto said. Psychiatrists say that nicotine can exacerbate underlying mental health conditions; it can also lead to hyperactivity, depression and anxiety.

Pam Debono of Bloomfield Hills, Mich., is in the throes of helping her three children, ages 17 through 20, stop vaping for good.

“At first we thought, ‘It’s just a phase that takes wanting to quit, some self-discipline, and then it’s done,’” Mrs. Debono said. Turning to standard carrot-stick methods, she and her husband began sanctions like grounding and then cutting off their children’s allowances, so that the kids couldn’t afford the flavored nicotine cartridges.

But the couple had to grimly acknowledge nicotine’s physiological grip. “We sure wouldn’t treat alcohol or prescription drug addictions that way,” Mrs. Debono said.

They tried nicotine patches and gum, to no avail. They withstood howling windstorms of teenage irritability that come from common withdrawal symptoms: disrupted sleep, unbottled anxiety and ramped-up moodiness.

Even when the kids managed to stop, they would resume at moments of stress, using the vapes as a kind of self-soothing medication. Now Mrs. Debono resorts to home kits for random nicotine testing.

Unfortunately, methods for quitting cigarettes can’t be grafted onto vapes. While cutting down on daily cigarettes can include simple math — cutting back, say, from the 20 cigarettes in a pack to 18 to 14 and so on — an analogous method doesn’t readily apply to vaping.

That’s because the amount of nicotine each person inhales and then absorbs through e-cigarettes is difficult to measure. A formula for reducing cigarettes doesn’t readily translate to pods or cartridges.

Moreover, medications for breaking nicotine’s hold over cigarette smokers, including nicotine patches and prescriptions, don’t work for everyone and are mostly approved just for adults.

Absent formal guidance, pediatricians are stymied. “We are using our best judgment but we don’t know exactly what to do. There’s no sound science yet,” said Dr. Susanne E. Tanski, who will represent the American Academy of Pediatrics at an F.D.A. hearing next year on vaping interventions.

Vicki, a mother in suburban Boston who requested that her last name be withheld to protect the family’s privacy, asked her pediatrician for suggestions for her son, 17, who has long been trying to give up Juul. The doctor recommended several addiction centers.

“They were all for adults!” she said.

Jonathan Hirsch, a social studies teacher who oversees tobacco and vaping education at Redwood High School in Larkspur, Calif., where 36 percent of 11th graders say they vape, said that even students who want to quit struggle mightily to do so. They will purposely not take their Juuls to school, only to relent at lunchtime and rush home for a hit.

Mr. Hirsch said that although instilling a fear of disease can be a successful tool to prevent cigarette smoking, using fear to intercede with students already vaping does not work. Faced with losing their devices — their nicotine — they become furtive or lash out. One parent took away his son’s vape, Mr. Hirsch said, and the boy got so worked up that he punched a tree and broke his hand.

Nor do habitual vapers stop because of the threat of consequences. “When I asked my students the other day if they know someone who routinely leaves the class to vape because they ‘have to,’ at least two-thirds raised their hands,” Mr. Hirsch said.

The perception that everyone vapes points to the biggest obstacle in persuading teenagers to quit: the pugnacious, peer-glued nature of adolescence itself. It’s stylish. Forbidden.

In addition, while making that first step in recovery — owning the addiction — is difficult for any addicted person, it’s arguably harder for teenagers, who are loathe to admit dependence on anyone or anything.

“It’s not often that you find a 16-year-old who says, ‘Hey Mom and Dad, I’m addicted to vapes, can you take me to therapy?’” said Bonnie Halpern-Felsher, a Stanford professor and developmental psychologist who researches adolescent behavior around tobacco products. “Young people don’t do that. And how many even know they’re addicted?”

Language is essential, she said. If a doctor asks about “e-cigarettes,” most teens will say no, because “cigarettes” are out of favor. To familiarize confounded parents with products, Dr. Tanski shows them an assortment of vapes that she’s nicknamed “my petting zoo.”

When patients taunt, asking if she prefers that they smoke cigarettes, Dr. Tanski discusses the potential harm of the particles and chemicals in a vape’s aerosol, which can harm the airways. “I’ll say, ‘We know a lot of bad stuff now about tobacco, but it took so long for those diseases to develop and for us to learn about them. I’m not willing to do this experiment on you.”

Dr. Sharon Levy, an adolescent addiction expert at Boston Children’s Hospital, will do “motivational interviewing” — educating teenagers so they will want to quit vaping for their own sake, not just to get parents off their backs. Cognitive behavioral strategies offer paths to redirect thoughts during cravings, she said. She also does mental health evaluations to determine whether the teen is vaping to ease underlying anxiety or depression.

Her practice admits up to 10 new patients weekly. “I’d say 75 percent have vapes as part of their story,” she said.

The other day she was assessing a middle-schooler whose dependence was so severe that he had been skipping classes to vape in the bathroom.

“He’s going to class now but sees himself as vulnerable, because he’s worried he won’t be able to resist the cravings,” Dr. Levy said. “It’s all he thinks about. It’s like treating a patient who has stopped heroin but wants to inject himself with an empty needle.”

Typically, that initial intervention doesn’t occur with a doctor. “Schools are usually the first to catch young people vaping and then try to figure out what to do,” said Dr. Halpern-Felsher. She and her team developed a free online guide called the Tobacco Prevention Toolkit, which includes a major unit on vaping and Juuls. The program has reached 200,000 students.

One school told her that the kit’s message about how manufacturers are manipulating teens inspired some indignant students to cut back.

Without a holy grail for vaping cessation, the toll on families is searing.

“I believe the companies who created these things should pay for treatment,” Vicki, the suburban Boston mother, said through angry tears. “They targeted children. They said it was just about trying different flavors and having fun. Well, they’re the devil to me.”