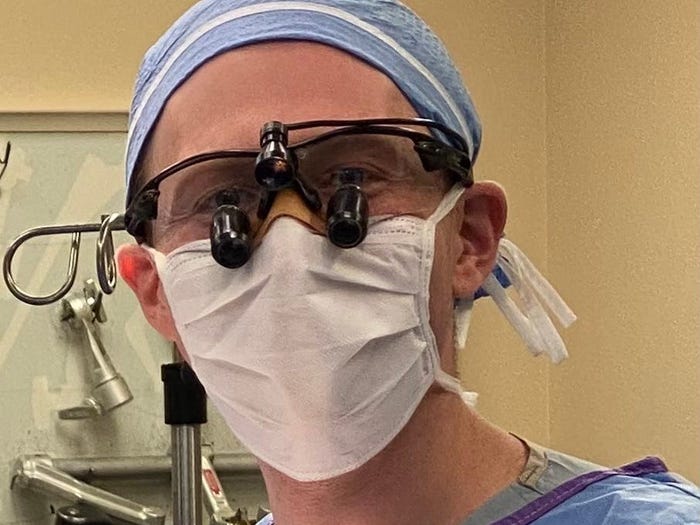 Two months ago, Dr. Daniel Heiferman joined Twitter because he wanted to feel more involved in the neurosurgery community after in-person conferences and trainings were cancelled or moved online.

But on November 12, Heiferman strayed from medical Twitter to offer up a tip to laypeople struggling with face masks fogging up their glasses or slipping off their noses: "A simple bandaid does wonders. Learned it in the OR," he wrote, adding a selfie of his mask secured with a Band-Aid over the bridge of his nose.

The tweet, to his "unbelievable surprise," went viral, Heiferman told Insider, acquiring more than 65,000 retweets and 171,000 likes as of this article's publication. Model and entrepreneur Chrissy Teigen even retweeted his post.

Now, Heiferman is sort of an unofficial spokesperson for wearing masks, having been interviewed by a local TV station and Cosmopolitan magazine alike. The tweet also landed on the front page of Reddit.

Heiferman said each media opportunity is a chance to tell a new audience about how to wear masks safely and comfortably so that, collectively, we can help defeat the novel coronavirus. In places where they're mandated, for example, rates of COVID-19 sink, and one recent model estimated that if all Americans wore them, 63,000 more US deaths could be prevented by March.

"My hope is that I could reach out and help people who are having difficulty wearing masks and wearing them well and wearing them properly," Heiferman said. "It's an unbelievable thing I've gotten to share with the world."

To secure the Band-Aid, put half of it on the mask and half on the face

Heiferman can go through a full day of surgery, which is at least 12 hours, without removing his mask and with the Band-Aid secure. If he takes it on and off to eat, for instance, he'll replace the bandage when it looses its stickiness.

To secure the Band-Aid, put the cotton part on the bridge of your nose, with half of the sticky part on the mask and half on your face, Heiferman recommends. He likes the large Band-Aids, which allow enough contact between both the skin and the mask to stay put.

"I also personally like the fabric Band-Aids," he said, "but people should try different styles and sizes and find what works best for them."

That experimental attitude is what led Heiferman, who doesn't wear glasses, to discover the hack in the first place.

In surgery, he wears "loupes," which are like little microscopes that attach to goggles or glasses. While some of his colleagues use tape to keep their medical masks secure over their noses, which prevents fogging, that method irritates the skin on the bridge of Heiferman's nose.

He realized a Band-Aid, with its padding over that sensitive spot, did the trick to prevent both fogging and irritation. People who wear glasses, which on their own may offer some protection against COVID-19, took note after Heiferman's posting on Twitter, and some offered their own creative solutions to fend off fog.

Some whose masks don't stick well to Band-Aids, for example, said they use garment tape, usually marketed to gown-wearing women who need to keep bits of fabric literally close to chest, to make sure their masks are sealed to their faces.

There are ways to make mask wearing more comfortable, whether your concern is skin irritation or asthma

"I feel for people who've never had to wear a mask," including his wife, Heiferman said, but encourages them to take his example and find a way to do so that's both safe and effective.

The most effective fabric masks have three layers, for example, including an inner layer that absorbs, a middle layer that filters, and an outer layer made from a nonabsorbent material like polyester.

But fit matters just as much; a well-fitting mask should seal around the nose and mouth, preventing potentially infectious respiratory droplets from escaping through any gaps.

"I can't tell you how frequently I see people whose noses are exposed, which is as good as not wearing anything, or readjusting it constantly, or bringing it down to speak," Heiferman said. "Everyone is having to reinvent the wheel on this."

Others with medical conditions like asthma or COPD, meanwhile, may benefit from cloth masks made with a moisture-wicking and breathable fabric, according to the arthritis organization CreakyJoints. Doctors previously told Insider there is no validity to claims that medical conditions can exempt people from wearing masks.

"At the end of the day," Heiferman said, "everyone is making their sacrifices, and wearing a mask is just one of them."