43 million Americans — said to include R. Kelly — struggle to read and write

George is a 79-year-old retiree who ran a car detailing business for two decades, repaired airplanes, served as a deacon in his church and has nine children.

Brittani Bellamy is a 28-year-old who just recently got her own apartment, is practicing to get her driver’s license and works at Universal Studios.

They may not be at similar stages in their lives, but they share one defining characteristic: they’re among the estimated 43 million Americans who struggle to read or write.

The issue of adult literacy was cast into the spotlight recently when the legal team for singer R. Kelly cited his long-rumored illiteracy as to why he didn’t show up to court for a sex abuse lawsuit. He is also facing a slew of criminal sex abuse charges, which he has always denied.

Kelly’s criminal attorney, Steve Greenberg, told ABC News that the singer, who has 14 albums to his name – most of which he is credited with writing – along with an autobiography, is not able to write traditionally. 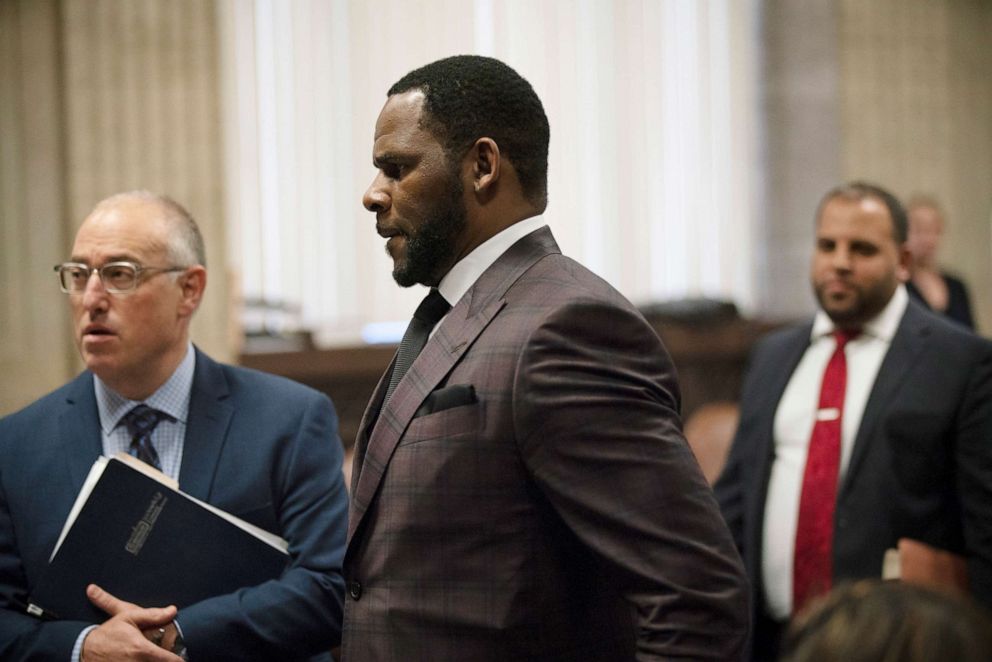 The notion that all or most native English speakers in America know how to read and write — at least on a basic level — is widespread and false, research shows.

The Program for the International Assessment of Adult Competencies, which is cited by the U.S. Department of Education, defines literacy as “the ability to understand, evaluate, use and engage with written texts to participate in society, to achieve one’s goals, and to develop one’s knowledge and potential.” It divides the population into five levels — with levels 2 and above being considered literate.

According to PIAAC,one in five U.S. adults has “low literacy” skills, which includes those classified as being either level 1 or below.

There are an estimated 26.5 million adults at level 1 according to PIAAC — those who can read and write at the most basic level but couldn’t read a newspaper or would have trouble filling out forms at a doctor’s office. Another estimated 8.4 million people are below level 1 and considered “functionally illiterate.” There are also 8.2 million others who were unable to participate in the survey because of either a language barrier or a cognitive or physical inability, and the PIAAC data classifies them as also having low literacy abilities.

“People don’t realize what a huge problem it is,” said Gina Solomon, the executive director of the Florida Literacy League.

While cases like that of R. Kelly receive national attention, there are millions of others who struggle in silence.

That was the case for the George, who asked that his real name not be published. He told ABC News that his dad was a sharecropper in Alabama and, back then, “you didn’t have to send your kids to school unless you wanted to.”

As he grew up and moved to Florida, he said his low literacy affected his work, though he found ways around it, like hiring someone else to do the accounting and filing when he ran a car detailing business.

“My reading was like a first grade student all that time,” George said. “I was just blessed. I always had people that was willing to help me and I had a determination that I was willing to make it, that I would have a decent life.”

His reading skills impacted his life outside work too. He said he was an active member in his local Baptist church and eventually rose to the role of chairman of the deacon board, but he couldn’t easily read the Bible.

George said that when he knew he was going to have to read a Bible passage that Sunday, he would prep ahead of time.

“I can get it and go over it a time or two with my children and wife so that I understand it and then I can remember it so that I can get up and talk about it and refer back to a various description of what I read,” he said.

Solomon said that coping mechanisms like this are common among those with low literacy. For instance, in some cases, those who can’t read say that they’ve left their glasses at home when they’re tasked with filling out a form or reading a menu, and then ask friends or people nearby to read for them.

Another work-around is for people to keep a piece of paper in their wallets that spells out their name or address clearly, she said. Then they are able to copy the information when they need.

She said that many with low literacy, like George, are “super charismatic or outgoing to kind of cover up for where they’re deficient.”

R. Kelly has been in the public eye for decades, yet, according to his lawyer Greenberg, there have been ways he’s been able to get around his low literacy, like by working with other people when writing lyrics who could “clean it up, type it up.”

Greenberg said that on a note he had received from Kelly, the word “money” was missing the e, “rumor” was spelled “roomer” and “which” was spelled “whche.”

Brittani Bellamy also had significant trouble reading and writing. She was home schooled by her parents, but, as she told ABC News, “it didn’t really work out as it should have, and as I got older I realized I didn’t know how to read.” 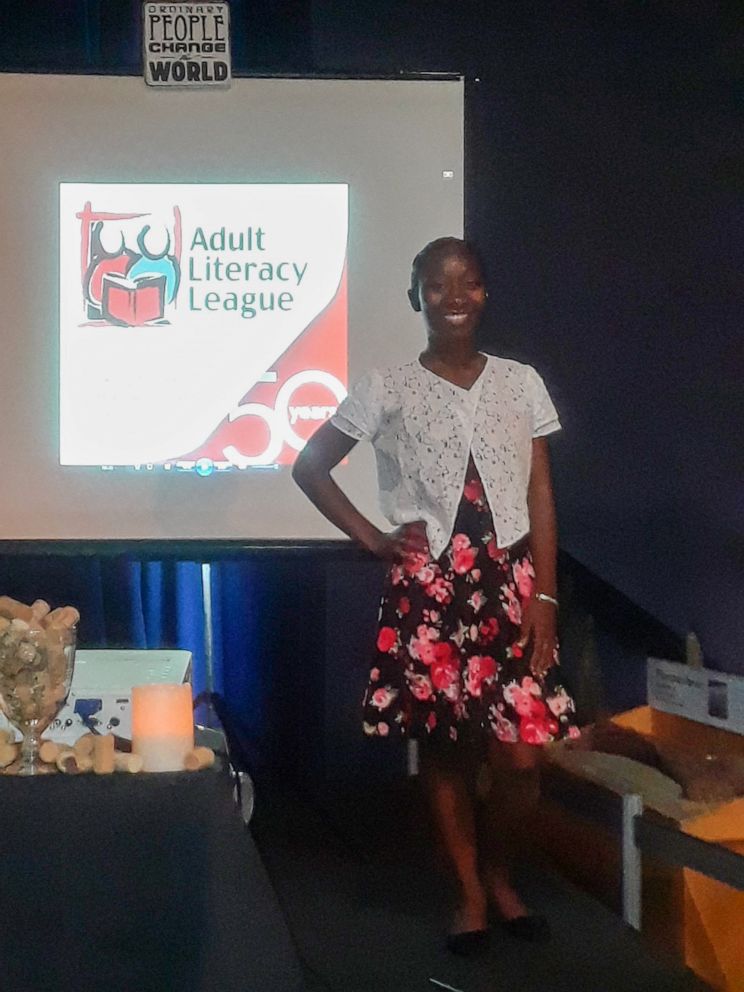 Bellamy, who is now 28 and is still close with her parents, said that it wasn’t until she started going to church six years ago when the pastor encouraged her to seek extra learning help.

“I was afraid because I didn’t want anyone to making fun of me,” she said, explaining why she resisted earlier help.

“I was ashamed to say ‘Oh I was 22 and I could not read.’ I was ashamed of a lot of things and being in this world people, don’t embrace you right off the bat,” she said. “They judge you and they make you feel ashamed of whatever you went through in your life.”

Both Bellamy and George sought help at the Florida Literacy League, where they both take group classes and have personal tutoring.

Solomon said that the stigma faced by native English speakers was more pronounced than what foreign-born students faced, suggesting that there was more empathy for students for whom English is a second language (known as ESL students), but she says that has changed.

“In today’s political climate, you hear all the time people say to our students out in public… ‘you came here you don’t speak English?’” Solomon said.

Michele Diecuch, the director of programs at ProLiteracy Worldwide, a nonprofit adult education organization, said that harassment of non-English speakers is “one thing that we’re keeping an eye on.”

Such trends could have a significant impact on the low literacy community, as ProLiteracy Worldwide’s team estimated that about 60% of the adult literacy population in the U.S. counts English as a second language.

“We know that it could be very well likely to the changing attitude and rhetoric around non-English speakers and anyone from another country, any immigrants,” Diecuch said.

“It’s something we’ve heard anecdotally from our member programs, that they are seeing learners being more scared to come to programs because of the attitudes around immigrants and even those who may be undocumented learners,” she said. “They’re choosing not to come to programs while the atmosphere is like it is.”

For those who have sought help, they say their lives are forever changed. George said that while he is the oldest one in his class, that hasn’t stopped him from learning and he loves to read about animals.

“If you call a word out, I can pretty much tell the first letter and the last letter in most cases… and that’s something I had never been taught,” he said.

As for Bellamy, the changes she’s seen extend past her reading abilities.

“I have a lot more confidence than I did six years ago,” she said. “I’m not ashamed anymore because at the end of the day you don’t know what people have been through. You don’t know if it was their decision or if they had no control over the decision.”

“I look back six years and it still blows my mind that where I am now … I can’t believe I have a job, I have my own apartment, I got my learners permit,” she added.