At least 15 people in England have contracted HIV while waiting to get access to a pill which prevents the virus, it has emerged.

People on low-income who cannot afford the drug privately can be put forward for the trial at sexual health clinics.

But England is the only place in the UK where places on the NHS-funded trial are restricted.

It has resulted in 15 people contracting the virus while waiting for access to the drugs, which are almost 100 per cent effective at staving off HIV. 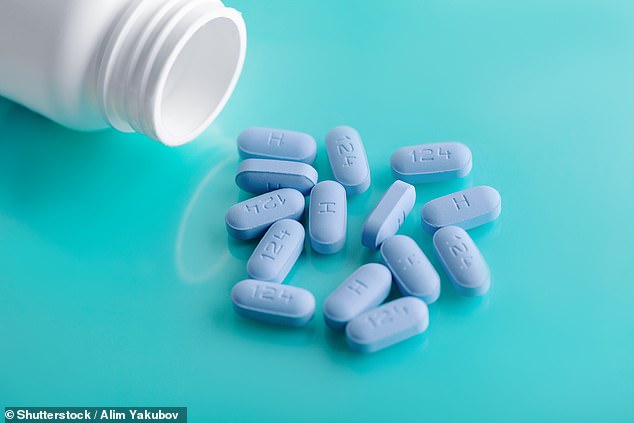 The British HIV Association is calling for PrEP to be doled out freely to prevent more people falling victim to the disease.

David, who is in his 40s and lives in London, acquired HIV while waiting for a place on the trial.

Unable to afford PrEP privately, he attempted to access the pills through two different sexual health clinics but was told there were no spaces on the trial available.

Just a few weeks later he became sick and was diagnosed with HIV. He said: ‘I was stunned. It was just like, “Oh my god how, how has this happened?”

‘PrEP needs to be readily available for anybody who wants it. Yes, there is a cost implication, I understand that – it’s a tablet for every person.

‘But that person who catches HIV, the costs are 10-fold, and that’s for life.’

PrEP is currently available free of charge on the health service as part of the Impact Trial, which began in September 2017 and ends next August.

But English clinics have struggled to keep up with the demand, meaning hundreds are missing out on the drugs.

WHY MODERN MEDS MEAN HIV IS NOT A DEATH SENTENCE

Then, ART (anti-retroviral therapy) was made, suppressing the virus, and meaning a person can live as long a life as anyone else, despite having HIV.

Drugs were also invented to lower an HIV-negative person’s risk of contracting the virus by 99%.

In recent years, research has shown that ART can suppress HIV to such an extent that it makes the virus untransmittable to sexual partners.

That has spurred a movement to downgrade the crime of infecting a person with HIV: it leaves the victim on life-long, costly medication, but it does not mean certain death.

Here is more about the new life-saving and preventative drugs:

It suppresses their viral load so the virus is untransmittable

In 1996, anti-retroviral therapy (ART) was discovered.

The drug, a triple combination, turned HIV from a fatal diagnosis to a manageable chronic condition.

It suppresses the virus, preventing it from developing into AIDS (Acquired Immunodeficiency Syndrome), which makes the body unable to withstand infections.

After six months of religiously taking the daily pill, it suppresses the virus to such an extent that it’s undetectable.

And once a person’s viral load is undetectable, they cannot transmit HIV to anyone else, according to scores of studies including a decade-long study by the National Institutes of Health.

It is 99% effective at preventing HIV

This pill works like ‘the pill’ – it is taken daily and is 99 percent effective at preventing HIV infection (more effective than the contraceptive pill is at preventing pregnancy).

It consists of two medicines (tenofovir dosproxil fumarate and emtricitabine). Those medicines can mount an immediate attack on any trace of HIV that enters the person’s bloodstream, before it is able to spread throughout the body.

Dr Iain Reeves, lead clinician for HIV at Homerton Hospital in east London, has had to break the news to multiple patients who were waiting to access the drug from his service.

He said: ‘Unfortunately, we didn’t have any places on the study. We gave them all the information about how they might be able to access it, including online purchase.

‘But of course, for a number of individuals, that’s very difficult, if you don’t have enough money to actually buy it online.’

Dr Laura Waters, chairwoman of the British HIV Association, said the limited spaces in England was down to a lack of funding in sexual health clinics.

She said: ‘When the Impact trial started, we only had the branded products available. Now it’s available as the unbranded generic version, which is much less expensive.

‘But the reality of creating more sexual health appointments when our funding has been cut is a very big challenge.

‘It’s not straightforward. But the reality is that NHS England are funding the drug through the trial, but it’s local authorities that fund sexual health clinics.’

The drug costs the health service about £11 per person per month, while privately-funded PrEP starts at about £30 a month, according to the BBC.

The price of treatments for an HIV-positive patient ranges from £100 a month to £500 a month and needs to be given to the person for the rest of their life.

In a statement, NHS England said: ‘The expansion will help ensure the learning from the trial can fully inform the planning of future services in partnership with local authorities, as well as protecting more people from HIV right now.’

The Department of Health said work was under way to plan for a ‘seamless transition from the trial to routine commissioning’ when the trial ends next year.

PrEP is a daily tablet called Truvada that contains tenofovir and emtricitabine – antiretroviral drugs that are commonly used to treat HIV.

The medication, taken either once a day or twice either side of sex, works for as long as there is enough of the drugs in the patient’s system, by blocking HIV if it enters the body.

They work together to interfere with an enzyme which HIV uses to infect new cells, slowing down the virus’ attack or preventing it altogether.

It comes as new HIV diagnoses in England hit an 18-year low in 2018 after a fall for the fourth year in a row.

It comes after the country last year hit the United Nations target of having at least 90 per cent of HIV patients with such low levels of the virus that they can’t pass it on.

PHE attributed the fall to ‘enormous testing and prevention efforts’ but the Terrence Higgins Trust, which noted progress is slowing, said more work needs to be done because there are still ‘unacceptable’ numbers of people being diagnosed late.

A Government health minister welcomed the low figure and said she would not get complacent in pursuit of the target of recording no new HIV cases from 2030.

HIV is a virus which infects the blood and damages cells in the immune system, making patients less able to fend off other infections and illnesses.

If left untreated for years it can develop into AIDS, which can kill, but modern medicine is able to stop this happening in people who are diagnosed in time.

Antiviral medications can also reduce patients’ levels of the virus to such small quantities that they are not affected by it and cannot pass it on.

Early diagnosis is key, however – most cases of the infection are spread by people who don’t know they’re HIV positive and therefore may not use condoms.

But HIV may only cause a flu-like illness for a week or two after they’ve become infected with the virus, then not have any symptoms for decades afterwards.

Figures estimate nearly 37million adults and children across the world have HIV, including at least 100,000 in the UK.