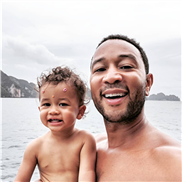 While on a family trip to Thailand, the “I Know Better” singer couldn’t help but show off his adorable kids,  Luna Simone, 3, and 15-month-old Miles, in a series of Instagram photos.

On Tuesday, Legend, 40, who shares his children with Bring the Funny host Chrissy Teigen, 33, began his family photo series with cute snaps of Luna, followed by three posts featuring Miles on Wednesday.

The singer made a splash with his first post of Luna, showing the two getting ready to hit the water — both wearing striped swimsuits while Luna sat up top a dolphin pool float.

“❤️🌈🦈[why is there no flamingo emoji on my phone],” he captioned the silly shot.

John later posted a selfie with his daughter, which featured the two dressed in traditional Thailand garb. And while the singer smiled wide for the photo, Luna kept a straight face — one user comparing the 3-year-old’s model look to that of her mother.

On Wednesday, The Voice judge added pictures of his son Miles — who’s the spitting image of Legend.

“Naked & Afraid: Baby Edition,” he captioned a snap of the baby sitting alone in the sand while surrounded by forest plants.

A follow-up post showed Legend’s mini-me in a close-up shot, sitting on the shore, while a third photo featured a cheery selfie of Miles and his dad posed in front of a beautiful body of water.

“Miles ❤️ Thailand,” the “All of Me” singer wrote, adding the Thailand flag emoij.

Getting in on the social media fun, Tiegen shared a video of herself and Luna having a “silent dance party” on Wednesday. In the clip, the mommy-daughter duo wear sailor hats and hilariously mimic each other’s dance moves.

Legend’s Instagram spree came days after his wife called him out for his lack of photography skills in an interaction highlighted by Comments by Celebs.

“I never have pictures of myself because I am selfless and am the designated photo taker and keeper for my family,” she captioned a selfie of her and daughter. “No one else seems to care to be thoughtful to take good photos of me.”

Teigen added, “They merely click them off without paying attention to angles or lighting or general photo ambiance. but it’s okay. Such is the life I chose.”

Making it crystal clear that she was talking about her husband, the mom of two ended the post writing, “to john.”

Responding to his wife’s joking critiques, Legend commented on the post with one word: “wow.”

In an attempt to clear his name, Legend went on to post a series of photos that he believed showed off his photography skills.

A day later, Legend got to work and proudly shared a stunning solo shot of Teigen, basking in her vacation glow.

“When your wife says you’re a bad Instagram husband but you’re like…” he wrote alongside a photograph that was taken at a flattering angle and with good lighting.

Feeling more confident in his photography skills, the singer shared another post of Teigen and Luna, which she had previously posted on her own Instagram account — seemingly winning her seal of approval.

“Photo by ….me!” he wrote, triumphantly adding the hashtag “Good Instagram Husband.”