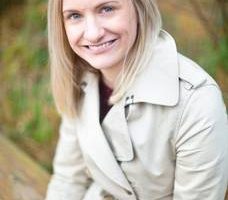 'Every new parent feels underqualified, because well, you are'

Like most parents in their hour of need, new mum Sarah Turner ventured online in search of the comfort of like-minded women who were experiencing the same struggles as she was.

But Sarah was in for a rude awakening. As far as she could tell, these online mothers were coping far better than she was, their picture-perfect account of motherhood revealing nothing of the post-partum pelvic floor issues or the sleep deprivation torment.

Sarah couldn’t find the warts-and-all sharing she was hoping for, so she decided to start her own honest account of motherhood, detailing the good, the bad and the ugly. And so, The Unmumsy Mum was born.

This was in 2013 after the birth of Sarah’s first son. Since then, The Unmumsy Mum has garnered hundreds and thousands of followers, penned two best-selling books, and now has a third book due to hit the shelves later this month, proving honesty really is the best policy. Sarah is also now a mother of three boys, aged seven, four and 20 months.

READ MORE: ‘Women have said they’re not aware they even have a pelvic floor’

So, has the parenting community become a little more honest since her initial disillusion with it six years ago?

“I think the parenting landscape has certainly changed over the last few years, and it is now more ‘acceptable’ to share your honest feelings about parenthood than it perhaps once was,” Sarah tells Mothers & Babies. “In practice, though, it’s still hard to be upfront if you’re struggling and this leads to mums attempting to ‘plod on’ despite needing help.” Sarah believes that all mothers fear judgement and that there is nothing worse than the thought of someone silently forming negative opinions about your parenting. “Outwardly trying to portray a ‘perfect’ image is a way to control that, I guess,” says Sarah. “It’s a statement to the world that you are coping brilliantly.”

READ MORE: Mum’s the word: Miriam O’Callaghan, Louise Duffy and Georgie Crawford on what their mothers taught them

This putting on a front has become synonymous with social media. Online, people only share the best of themselves and their lives; creating stories centred on harmony and perfection. Parents are no exception, going out of their way to fine tune their day, only showing off the best bits in their need to impress.

And even when they do carefully select just the right photo to post, they’re still leaving themselves vulnerable to criticism and judgement. For example, you post an adorable photo of your little one with a lolly in her mouth.

Cue an onslaught of people ready to bring you down for daring to give your own child sugar. With all this competitive parenting, are online platforms actually helpful to mums or do they just facilitate ‘mummy shaming’?

“Social media is both your friend and your enemy as a parent,” says Sarah. “Largely, I think it’s helpful. It’s a great way to connect with other parents at all hours of the day (or night!) and is a great resource for both advice and entertainment.

“The danger comes when you start comparing yourself and your life to what you’ve seen on social media, as you can end up feeling like you are failing in comparison. Always remember that someone’s social media feed is a selectively edited version of their entire real life,” says Sarah. READ MORE: Jennifer Zamparelli: ‘I really found being a full-time mum is the hardest job I’ve ever done, and I’ve done some s***ty jobs’

In Sarah’s latest book, The Unmumsy Mum A-Z, the blogger continues her commitment to telling the truth, with entries including D is for Desperation, S is for Supermum and V is for Vagina. Without being preachy, she reflects on what she’s learned along the way. But with three young children and a blog to maintain, just when did she find the time to write the book?

“My husband now works part-time so I am able to squeeze in more writing hours during the week,” says Sarah. “Even so, a vast amount of the new book was written in the evenings after the kids had gone to bed. I find I’m able to focus better when the rest of the house is sleeping.”

To new mums out there who are perhaps straining to keep it together, Sarah says you should cut yourself some slack. “Lower the expectations you have of yourself [as a parent] because the chances are you are putting far too much pressure on yourself. Never be afraid to ask for help and remember that whatever tricky phase you’re going through, this too shall pass.”

READ MORE: There is no ‘right way’ to parent

And the best thing parents can do to support each other? Talk!

“Chatting openly about your own experiences in turn invites another parent to talk about how they’re truly finding it. There is nothing better than finding a person who feels like a ‘safe space’ to talk freely about parenting to,” says Sarah. As she writes in her new book, “U is for Underqualified: Every new parent will feel underqualified. That’s well, because, it’s because we are underqualified.”

Sarah’s new book, ‘The Unmumsy Mum A-Z’, published by Bantam Press, is out on September 19