• While recovering from an injury, Sherif Mikhail’s activity levels declined, leading him to gain weight.
• After working with a weight loss coach to eat healthier and improve the efficiency of his workouts, Mikhail began to lose weight and get back in shape.
• As a result, Mikhail is now lean and strong and feels like he’s in the best shape of his life.

After being injured in a car accident, Sherif Mikhail couldn’t be as active as he wanted. The 44 -ear-old glass contractor from Culver City, California, fell into an emotional slump. He was eating bad and drinking alcohol as an outlet, even though it often made him feel worse. He was listless and tired—“I found myself feeling low and wasn’t happy with the way my clothes fit,” he says. After losing weight following the accident, he’d gained more back, hitting 186 pounds without even realizing it.

Though he was skeptical, he enrolled in a six-week transformation with Ultimate Performance fitness. He figured that in the worst case, he could take what he learned and use it to push himself forward. Instead, he was pleasantly surprised to find a personal trainer ready to train around his existing injuries and help him avoid new ones. “Being a client shouldn’t feel like a number,” he says. “It needs to feel personal. It’s in the title: ‘personal trainer.’ Lots of trainers forget that.”

With his trainer, Eric Bowling, he embarked on a fitness transformation. Since Mikhail had blown out both his knees, they focused solely on upper-body workouts, ripping through sets of bench presses, chin ups, hanging leg raises, ab crunches, and more. They’d alternate between heavy lift days and working out with lighter weights, but doing more reps.

“Dieting was a mind game,” Mikhail says, requiring him to strip away many of his former temptations. He weighed himself every morning, and logged everything: calories, protein, fat. He recorded his steps and how long he slept. He drank a gallon of water a day to reduce fluid retention. He prepped his meals: high in protein, lots of veggies.

Over six to eight months, he dropped 20 pounds of fat and packed on muscle. “The feeling is priceless,” he says. “It’s great waking up in the morning looking at yourself with a new look and body.” As someone who’d always worked out, but never been satisfied with the way he looked, the results were a revelation. He looks for moments to take off his shirt just to show off all his hard work—friends then tell him to put it back on because they’re making him look bad. And he can instantly strike up a conversation with anyone who trains as hard as he does, trading tips and secrets. 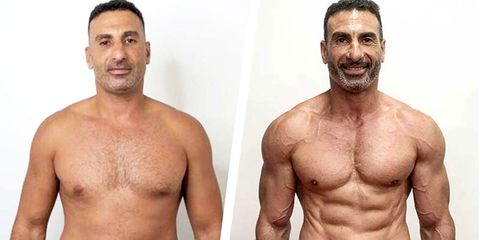 That doesn’t mean Mikhail’s resting on his gains. “I’m constantly looking to improve,” he says, “pushing myself on a day to day basis. Every year that passes I celebrate my birthday knowing each year I age I look better than the year before.” He’s dedicated to being able to say every year that he’s in the best shape of his life.

It takes drive, but as he says, “The pyramids were not built overnight.” Getting started may be the hardest part; once you get going, he says, seeing progress will keep you motivated. “Don’t wait another day,” Mikhail says. “Just start.”