Scientists gave more than 700 women with triple negative breast cancer Keytruda (pembrolizumab), a drug which has been shown to be effective in lung and skin forms of the disease.

The patients took Keytruda alongside chemotherapy to shrink their tumour, before having the malignant mass surgically removed.

Some 64 per cent of the women showed no sign of cancer after going under the three-pronged treatment, the study found. This is compared to 51 per cent of those who had chemo and a placebo.

Fifteen months later, the disease was 37 per cent less likely to return in the women who took Keytruda, the Queen Mary University of London researchers added.

The scientists have called the results ‘very promising’, with the drug having the potential to ‘cure more patients’ and ‘save thousands of lives’. 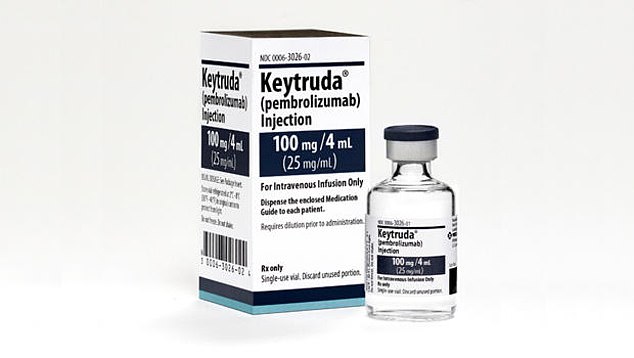 ‘We have been desperately looking for better treatment options. These early results suggest the addition of immunotherapy to chemotherapy leads to a substantial reduction in recurrences in this form of breast cancer.

‘These are preliminary results, but they are very promising. If we prevent the cancer from coming back, we cure more patients, but we need longer-term data to confirm this.’

He added, according to The Sun: ‘The potential of this is massive — this approach could save thousands of lives.’

Keytruda (pembrolizumab) is an IV immunotherapy that works with a cancer patient’s immune system to help them fight the disease.

It does this by blocking PD-L1 on the surface of cancer cells. This takes the brakes off the immune system, setting it free to attack cancer cells.

Keytruda, developed by Merck, has been approved by the FDA to treat the following cancers:

In the US, Keytruda – injected twice a week – can be used in adults or children with any of the above cancers that cannot be surgically removed or have progressed following treatment.

In June 2018, NHS England announced the drug will be routinely available on the health service for patients with lung cancers that have spread. It can already be dished out for patients with melanoma or Hodgkin lymphoma.

Some patients have also chosen to have the treatment privately.

Studies show the drug can shrink different types of tumours and boost a patient’s response to other treatments.

But Keytruda can also cause the immune system to attack healthy organs and tissue, which can be life threatening. Complications may include colitis, hepatitis or kidney failure.

One in eight women in the UK and US will develop breast cancer at some point in their lives, Cancer Research UK statistics show.

In the UK, triple negative breast cancer makes up 15 per cent of cases of the disease – around 7,500 people each year.

And in the US, it is responsible for 10-to-20 per cent of breast cancers, according to Breastcancer.org

Triple negative tumours do not have receptors for the hormones oestrogen and progesterone or the HER2 protein.

As a result, hormone treatments and the HER2-binding drug trastuzumab (Herceptin) do not work.

Patients are therefore usually forced to have chemotherapy and surgery.

Immunotherapy is increasingly being used to fight cancer by boosting the body’s natural defences.

To investigate its potential in triple negative breast cancer, the scientists tested Keytruda in 124 clinics across 21 countries between March 2017 and September last year.

Keytruda was given to 748 patients before and after surgery, while 390 women had chemo and a placebo.

After surgery, 64.8 per cent of the patients who received immunotherapy had no signs of cancer versus 51.2 per cent of those treated with chemo and a placebo.

Full results will be presented at the European Society for Medical Oncology (ESMO) 2019 Congress in Barcelona.

‘We know if cancer is completely gone out of the breast, they have a much better long-term survival, the cure rates are much higher,’ Professor Schmid said.

‘Whereas in patients where there is still cancer visible at the time that we do the operation, they have a higher risk of recurrence.’

Fifteen months later, there was a ‘favourable trend’ towards the patients staying cancer-free, which Professor Schmid calls ‘incredibly encouraging’.

Keytruda is an ‘anti PD-1 inhibitor’, which make cancer cells more ‘visible’ to the immune system.

In recent years it has become widely available on the NHS for lung and skin cancer, and is used in some cases for types of bladder cancer and lymphoma.

‘This study could have a major impact on treatment for these patients.’

Future research will track cancer recurrence in both Keytruda and placebo-treated groups over a long time, the scientists said.