Doctors are not using tools to help youths quit smoking 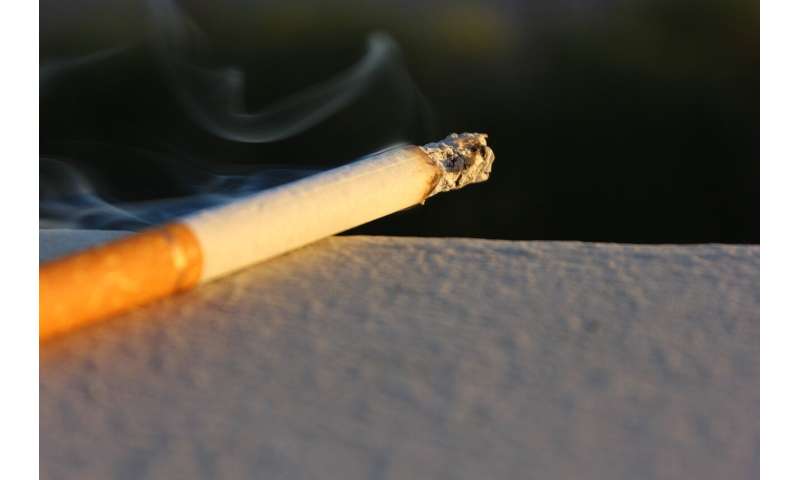 At a time when the rapid growth in electronic cigarette “vaping” among young people threatens to reverse decades of progress in reducing tobacco use, a large study published today in JAMA Pediatrics finds that medical professionals are largely failing to use existing tools to help young people quit smoking.

Medicaid data from more than 80,000 adolescents and young adults diagnosed with nicotine use disorder indicated that only four percent had received counseling to encourage them to stop using tobacco products, only 1.2 percent were prescribed medications to help them quit, and only one in 1,000 got both counseling and treatment, a combination that could double or triple their chances of quitting.

“We have treatments that are proven to work for older people and are very likely to work for young people as well. Not using these treatments is a missed opportunity,” says Nicholas Chadi, MD, MPH, a pediatrician at Boston Children’s Hospital and first author on the paper.

Nicotine, the main active ingredient in most tobacco products, is highly addictive. An estimated 20-30 percent of all smokers develop nicotine use disorder, unable to give it up and suffering withdrawal symptoms if they try. Its potential health effects are well known, and youth have an additional risk because their brains are still developing.

For 15 years or more, the American Academy of Pediatrics has issued periodic guidelines concerning the use of tobacco products in children. They urge pediatricians to ask their patients whether they or family members smoke or use electronic cigarettes, advise them on the dangers of tobacco products, encourage them to stop and, for those who are addicted, offer medication to help them quit. Among the medical options are nicotine replacement therapy (tapering doses of nicotine delivered via skin patch, gum, or lozenge) and two other drugs: bupropion and varenicline.

But are these things being done? To find out, Chadi and colleagues tapped a database of some 3.5 million Medicaid patients, between the ages of 10 and 22, across 11 states. Over an 18-month period in 2014 and 2015, 3.8 percent of patients had been diagnosed with nicotine use disorder. Among a smaller group of patients that had six months of follow-up after diagnosis, 95 percent had received no treatment or counseling related to their nicotine use disorder.

Nicotine use on the rise

The team hopes the paper will help persuade health care professionals—including pediatricians, nurse practitioners, and school health providers—to take advantage of interventions at their disposal, especially in light of the recent resurgence in nicotine use through electronic cigarettes.

“As providers, we have a tremendous opportunity here to intervene and help prevent future generations of people dealing with the long-term health consequences of nicotine use disorder,” said Scott Hadland, MD, MPH, MS, senior author on the report, and a pediatrician and addiction specialist at Boston Medical Center’s Grayken Center for Addiction. “We have tools that we know are effective in helping curb nicotine addiction, and we need to get these tools into the appropriate hands.”

Adolescent smoking had dropped nearly five-fold since the Surgeon General’s 1964 report warning of the health risks. But in the last decade, the soaring popularity of e-cigarettes has driven up youth tobacco use. E-cigarette use among high school students rose nearly 80 percent in a single year, from 2017 to 2018, as new vaping devices, candy-like flavors, and youth-oriented marketing campaigns enticed one out of every five students to try them.