Boy, 12, is given the all-clear from cancer after his mother fundraised £100,000 for treatment in Turkey that was denied to him on the NHS

A mother claims her 12-year-old son has been given the all-clear from cancer after flying to Turkey for treatment.

Toni Ilsley’s son Charlie was diagnosed with the brain tumour medulloblastoma when he was just eight years old in 2015.

The youngster, from Reading, had surgery to remove the mass, only for it to return to his spine in March last year.

His mother took it upon herself to research treatments after doctors reportedly told her there was nothing more they could do.

Mrs Ilsley came across a targeted radiotherapy, called CyberKnife, online. The NHS has since said this is ‘not clinically appropriate’ for Charlie’s cancer.

After fundraising £100,000 ($121,110) for the treatment in Turkey, Charlie has reportedly been given the all-clear from the same doctors who said his tumours were untreatable 18 months ago.

Mrs Ilsley believes if she had listened to the medics ‘Charlie wouldn’t be here now’. 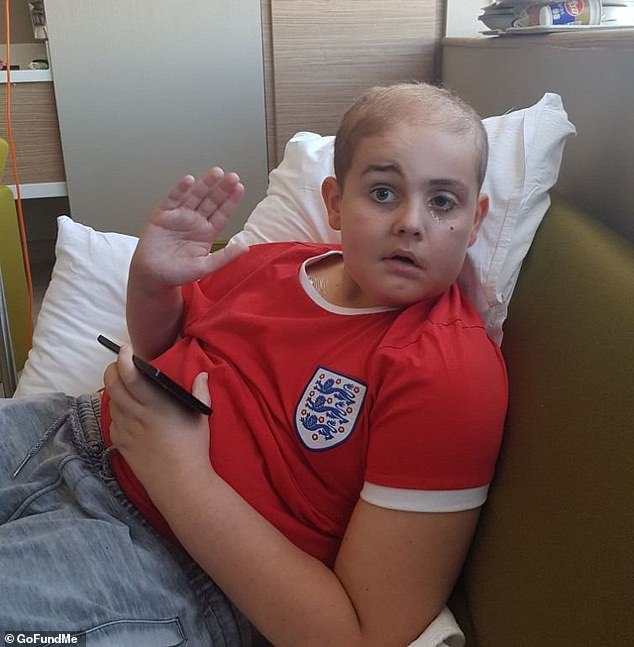 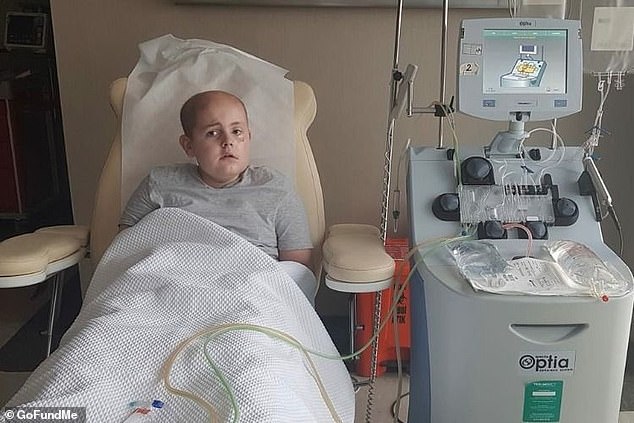 The youngster endured many rounds of chemo, as well as ‘targeted radiotherapy’, known as CyberKnife. His mother came across the treatment online after doctors reportedly told her there was nothing they could do to stop her son’s cancer spreading once it reached his spine

Speaking of the doctors’ initial prognosis, Mrs Ilsley told the BBC: ‘If I had listened to them Charlie wouldn’t be here now – it doesn’t bear thinking about.

‘When Charlie had his first scan in Turkey and the first treatment was working, I remember feeling really happy.

‘And then [I felt] angry this couldn’t be done in my own country.’

Once diagnosed with a brain tumour, Charlie underwent emergency surgery to remove the mass, followed by ‘many rounds of radiation’ and four stem cell transplants, according to his GoFundMe page.

The youngster was recovering well until tumours were later discovered in two places on his spine.

Charlie then underwent two rounds of chemo, however, his tumours still doubled in size.

Mrs Ilsley claims doctors at John Radcliffe Hospital in Oxford told her family there was nothing they could do to stop Charlie’s cancer spreading.

Refusing to accept the prognosis, she arranged for her son to go to Memorial Hospital in Ankara, Turkey, which charged £30,000 ($36,385) for the treatment.

Once there, each of Charlie’s two tumours underwent three rounds of CyberKnife radiotherapy, with him also having chemo.

The youngster was able to return home for a short while before flying out again for a second and third course of the treatment regimen.

Charlie’s family had to make ‘some additional payments’ to cover the cost of drugs that prevent the side effects he had suffered before.

An MRI scan showed Charlie’s tumours were shrinking, however, he still required two cycles of chemo and a stem cell transplant.

The transplant added ‘quite a large amount to the costs’ but was necessary to ‘give him the best chance possible’. 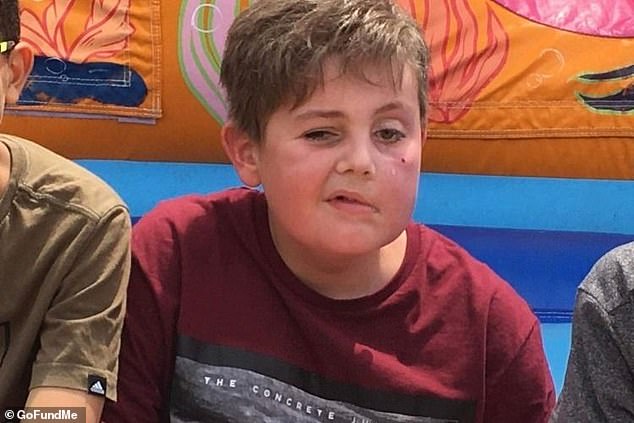 Eighteen months later, the same doctors have reportedly given Charlie the all-clear 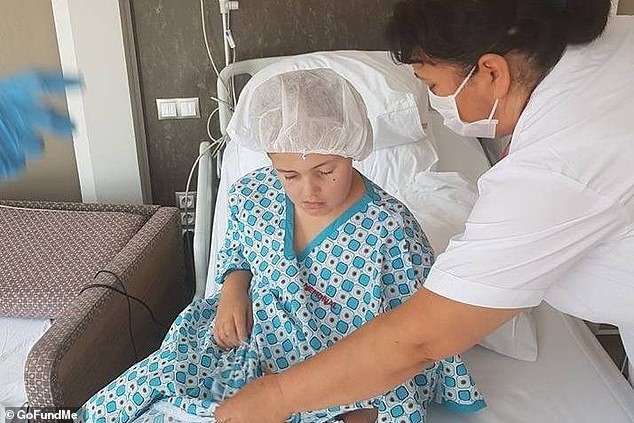 Charlie’s mother Toni fundraised £100,000 ($121,110) to cover the treatment, as well as a stem cell transplant, drugs to prevent side effects and additional immunotherapy in Germany

Following the procedure, an MRI scan came back ‘very positive’, with Charlie even being able to return to school part-time.

Immunotherapy is a type of cancer treatment that helps the immune system fight the disease.

During this time, Charlie’s father Mark was diagnosed with a ‘rare cancer’ and required surgery.

Not wanting to delay the youngster’s treatment, Charlie and his mother flew to Germany last month.

Once home, Charlie had a check up at John Radcliffe Hospital, where he received the good news. It is unclear how his father is doing.

NHS England said it does not comment on individual cases but said ‘decisions about the right treatment are difficult’.

It added the NHS funds targeted radiotherapy for lung cancer, however, it is not always ‘clinically appropriate or a better treatment’ than therapies available on the health service. 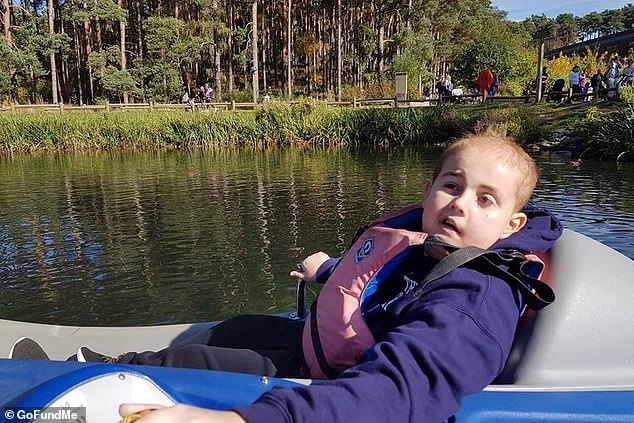 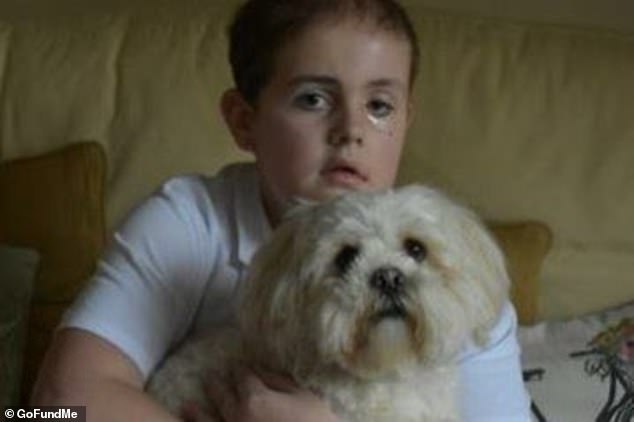 WHAT IS THE CYBERKNIFE?

CyberKnife is a form of radiotherapy that targets the exact location of a tumour.

X-ray cameras monitor the position of a malignant mass, while sensors analyse the patient’s breathing.

This enables a robot to position a radiotherapy beam that targets the tumour while avoiding healthy surrounding tissue. The robot moves with the patient’s breathing.

Due to its sub-millimetre accuracy, the CyberKnife allows larger doses of radiotherapy to be administered, which results in fewer hospital visits for the patient.

Conventional radiotherapy delivers radiation to both the tumour and its surrounding healthy tissue. This was required due to tumour movement not being monitored during the treatment.

This increased the risk of damage to the healthy tissue, as well as other side effects.

CyberKnife can be suitable for certain brain, lung, spine, liver, pancreas and prostate cancers. However, patients are selected on a case-by-case basis.

NHS England says the treatment is ‘not always clinically appropriate’.

Related posts:
Health News after, all-clear, been, cancer, given, Has, in, sufferer, the, Treatment, Turkey
Health Problems